Myocutaneous cysticercosis – A hidden worm caught by an ultrasound

Cysticercosis is one of the common parasitic infections that can affect many sites in the human body, though often seen in the brain and the eyes. Myocutaneous form of cysticercosis is often rare since most of them are asymptomatic and often go unnoticed. They often present to the emergency department due to pain over the lesion or central nervous manifestations. Here, we report a case of subcutaneous swelling, initially thought of as lipoma/abscess, later diagnosed as cysticercosis with the ultrasound. Myocutaneous cysticercosis can mimic various conditions such as lipoma, abscess, epidermoid cyst, ganglion, tuberculous lymphadenitis, pyomyositis, or fat necrosis. Hence, differentiating this from others in the clinical setting is essential because treatment modality is different.

Many parts of Latin America , sub Saharan Africa, India, and Asia are endemic zones for cysticercosis due to overcrowding, contact with asymptomatic carriers, ingesting contaminated food, and poor hygiene. In endemic regions, 10%–20% of the population have cysticercosis evidenced by a brain calcified lesion. Those who have not traveled to endemic areas nor consumed pork can also develop cysticercosis. Human beings are the definitive hosts, whereas pigs are the intermediate hosts. It can affect various sites in the human body. This case report is about myocutaneous cysticercosis, initially thought of as lipoma/abscess later diagnosed based on the point of care ultrasound (POCUS) findings.

A 34 year old male presented to the emergency department (ED) with a painful, 4 cm × 3 cm upper chest swelling on the right side which gradually increased in size over 2 months. The swelling was painful that led the patient to our ED. There was no history of any discharge from the swelling. There is no history of fever or trauma. The patient eats pork occasionally. At the time of presentation, the patient was conscious, oriented, and vitally stable. On local examination, a soft, nontender, oval shaped, mobile swelling [Figure 1a and b] of the size of 4 cm × 3 cm was there at the right infraclavicular region. There was no erythema, warmth, or any pus discharge from the swelling. The swelling was solitary; no similar swelling was seen on other parts of the body.

The initial probable clinical diagnosis was a lipoma, but sonographically, the swelling mimicked an abscess. POCUS examination showed a 3.6 cm × 1.5 cm well defined cystic lesion [Figure 1c] with internal debris and eccentric hyperechoic foci of size 5 mm × 2 mm in the right pectoralis major muscle. The surrounding muscle area showed increased vascularity. With the clinical presentation and POCUS findings, the diagnosis made was myocysticercosis of the right pectoralis major muscle. The patient was treated with an analgesic and advised to follow up in the surgical outpatient department for further management decisions regarding conservative or surgical management. The patient was managed conservatively as it is a single noninfected myocutaneous cysticercosis. We obtained written informed consent from the patient.

The subcutaneous and myocutaneous form of cysticercosis is a relatively rare form of cysticercosis. It should always be borne in mind while evaluating any case of subcutaneous swelling. Infection due to the larval and adult form of Taenia solium causes this zoonotic disease, namely cysticercosis.[1] When a human consumes uncooked or undercooked, or contaminated food with parasites’ eggs, the embryos present in the eggs are released out and enter the bloodstream, reaching the various parts of the body, forming cysts.[2] Most commonly, cysts will be formed in the central nervous system and the eye, accounting for 86% of cases. Other body parts include the heart, lungs, peritoneum, breast, and muscles.[3] Both vegetarians and nonvegetarians can develop cysticercosis. The epidemiological prevalence of cysticercosis in the region the patient is from is nearly 29.3/1000 population. Worldwide, it accounts for 30% of acquired epilepsy cases. In specific communities, the association with epilepsy can be up to 70%. As per WHO data, nearly 2.56–8.3 million cases worldwide, including both symptomatic and asymptomatic patients, were infected with cysticercosis.

The clinical characteristics depend on the number of cysts, the body parts involved, and the host reaction.[4] Most live cysts do not cause an inflammatory reaction. However, as the cyst degenerates, the acute inflammatory reaction can be due to the release of parasitic antigen. Degeneration usually happens years after the initial infection. All the clinical symptoms are often due to granulomatous inflammatory reaction that occurs when the larvae die. Subcutaneous or myocutaneous cysticercosis may present as painful or painless swelling. Muscular cysticercosis is usually classified as myalgic, pseudohypertrophy, or pseudotumor/abscess [Table 1]. Clinically, soft tissue cysticercosis can be misdiagnosed as lipoma, abscess, epidermoid cyst, sebaceous cyst, pyomyositis, ganglion, tuberculous lymphadenitis, or fat necrosis. Whenever patients present with painful or painless swelling for a long duration, cysticercosis should be suspected. Scolex, detached hooklets, and cysticercosis cellulosae wall fragments are frequently seen in fine needle aspiration cytology (FNAC) or biopsy. Rarely, larval parts are not seen, but an inflammatory reaction with a huge number of histiocytes and eosinophils may be present. Although definitive diagnosis is by FNAC, ultrasound (USG) can be a reliable initial modality for soft tissue cysticercosis diagnosis.

Cysticercus lesions are seen as well defined anechoic or hypoechoic lesions with or without calcifications in USG. USG finding of cysticercosis can present with cystic lesion with internal debris and eccentric hyperechoic foci. Patients with multiple cysts may develop subcutaneous nodules or pseudohypertrophy of muscles.[4] Other USG features include intramuscular abscess with an eccentric cyst with a scolex and fluid leakage around due to the degeneration of the cyst, resulting in a chronic inflammatory response with a fluid collection surrounding the cyst. It also presents as an irregular cyst with an absent scolex but with minimal fluid around the cyst on one side, indicating fluid leakage. In some cases, the scolex may not be visible as the scolex escapes the cyst. Different sonographic appearances of myocutaneous cysticercosis are mentioned in Table 2. Lipoma appears sonographically as a well defined ovoid lesion, with clear margins, linear internal strands, and variable echogenic density.[5] Sonographic features of abscesses include anechoic or hypoechoic fluid filled lesion with posterior acoustic enhancement. Ultrasonographic fluctuance (swirling motion of abscess content) is seen when the sonographer applies gentle pressure over an abscess.[6] Lymph nodes are often oval hypoechoic structures with echogenic hilus. 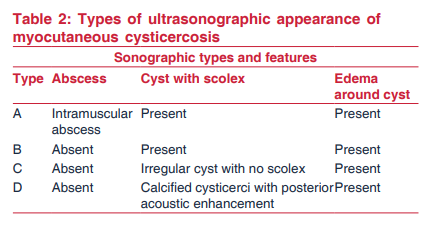 Depending on the size, number, location, stage (viable, degenerating, or calcified), and associated symptoms, treatment strategies differ in soft tissue cysticercosis, including conservative, medical, or surgical management. Conservative management is done for an isolated asymptomatic single soft tissue lesion. Multiple soft tissue lesions can be managed medically. Cyst without abscess can be treated with albendazole or praziquantel. For patients with one to two cystic lesions, albendazole 10–15 mg/kg/day in two divided doses (maximum 1.2 gm per day) can be used for 2-3 weeks. For patient with more than two cystic lesions, albendazole 10–15 mg/kg/day in two divided doses with praziquantel 50 mg/kg/day in three divided doses can be used for 2–3 weeks.[7] Adjunctive therapy includes prednisolone (1 mg/kg/day) or dexamethasone (0.1 mg/kg/day) for 2–3 weeks. One day before the antiparasitic treatment, steroids should be started, continued along with the treatment, and gradually tapered.[8] Surgical removal can be considered for myocutaneous cysticercosis with abscess. Systemic cysticercosis or neurocysticercosis can also be treated with the above regimen. USG follow up after 3–4 weeks may show resolution of the lesion.

Declaration of consent from patient’s close relative: The authors certify that they have obtained all appropriate consent forms from the patient’s wife. In the form, the patient’s wife has given her consent for the images and other clinical information to be reported in the journal. The patient’s wife understands that the patient’s name and initials will not be published and due efforts will be made to conceal the identity, but anonymity cannot be guaranteed.