OBJECTIVES: This study was carried out as a methodological study to adapt the stressor scale for emergency nurses to Turkish and to test its validity and reliability.

MATERIALS AND METHODS: Data were collected between April 2019 and December 2019 from 250 emergency nurses working in the emergency department of two different universities and two state hospitals. The scale was reapplied to 40 emergency nurses from the sample group 3 weeks after the first application. For the validity studies of the scale, language validity, content validity, and construct validity studies were used, and for the reliability studies, internal consistency and test–retest reliability methods were used.

RESULTS: It was found that the content validity index of the final form was determined as 0.92 (0.78–1.00) according to expert opinions, the scale explained 69.19% of the total variance in four subdimensions, the Cronbach’s alpha value was 0.90, and the test–retest intraclass correlation coefficient value was 0.97.

CONCLUSION: It was concluded that the reliability and validity of the scale was high for Turkish society.

Stress is an individual’s response to a change in current circumstances or to a threatening situation. Stress is also defined as a sense of mental pressure and tension. Low levels of stress may be desirable and may even be beneficial. The positive aspect of low‐level stress is that it can improve biopsychosocial health and improve mental performance. In addition, low level of stress is accepted as an important factor in motivation and adaptation to the environment. However, high levels of stress can cause serious harm to biological, psychological, and social problems and even to human health.[1]

Due to their nature, emergency departments are mixed, crowded, and stress‐intensive. Especially when the patient density is high, daily activities of the emergency department create high levels of stress.[2] Emergency nurses, who constitute an important part of the emergency department team, face many incidents such as aggressive patients and relatives, trauma, and life threats. They are constantly witnessing human suffering and deaths. When working under intense stress in overcrowded environments, they compete over time, and they are under the pressure of fast and accurate decision‐making. On the other hand, emergency nurses experience the pressure of working in harmony with many health professionals as a team. Much is expected of nurses in conflict management. They share the experiences of the patients and their relatives as the first and ever health‐care professional in every event. All of these can cause anxiety at various levels and show emotional and physical stress effects in emergency nurses.[3‐6]

In this research which was designed methodologically, between April 2019 and December 2019, 250 emergency nurses working in the emergency department of two different universities and two state hospitals agreed to participate in the study. The sample of the study consisted of nurses working in the emergency department who volunteered to participate in the study. In the methodological studies, it is stated that 5–10 times the number of scale items should be taken into account when calculating the sample size;[9] therefore, sampling was conducted with 250 nurses. The data collection forms used in the study were the nurse information form, which included sociodemographic variables related to the individual, and the SSEN.

Nurse information form
It was created by the researchers in accordance with the literature information. The form consists of questions about sociodemographic characteristics such as age, gender, and marital status.

Language validity
The scale was first translated from English to Turkish by the researcher to ensure the validity of the scale. Subsequently, it was translated from English to Turkish by five Turkish native speaker faculty members who are fluent in English. As a result of these translations, the most appropriate expressions were determined and the translation of the scale back to English was made by the certified linguist. The original version of the SSEN was compared with the translations and appropriate corrections were made in accordance with expert opinions. Expert who decided on the success of the proof‐reading is certified and blind to the team and unfamiliar with the study protocol.

Cronbach’s alpha and Guttman’s split‐half coefficient were calculated for the evaluation of internal consistency.

Test–retest reliability
When the same measurement tool is applied to individuals at different times, the similarity and consistency of the responses of the individuals to the measurement tool items shows the invariance of that measurement tool. This is a necessary feature for a reliable measuring tool. Invariance is evaluated by test–retest measurements and is one of the most commonly used reliability analyzes.[9] A total of 250 emergency nurses were surveyed. Three weeks after the first interview, 40 emergency nurses were reinterviewed and the SSEN was readministered. The relationship between the scale scores obtained from the test and retest was evaluated using the intraclass correlation coefficient (ICC) to evaluate the test–retest reliability.

Research ethics
To evaluate the validity and reliability of the SSEN, necessary permissions were obtained from Nuttapol Yuwanich and the Ethics Committee of Medical Research (Decision No.: 19‐5.1T/41).

The distribution of the ED nurses in the study is summarized in [Table 1]. The content validity index (CVI) of the final form was determined as 0.92 (0.78–1.00) according to expert opinions. 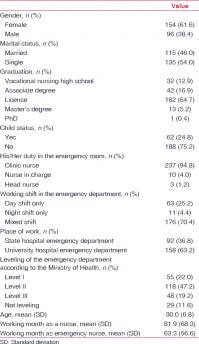 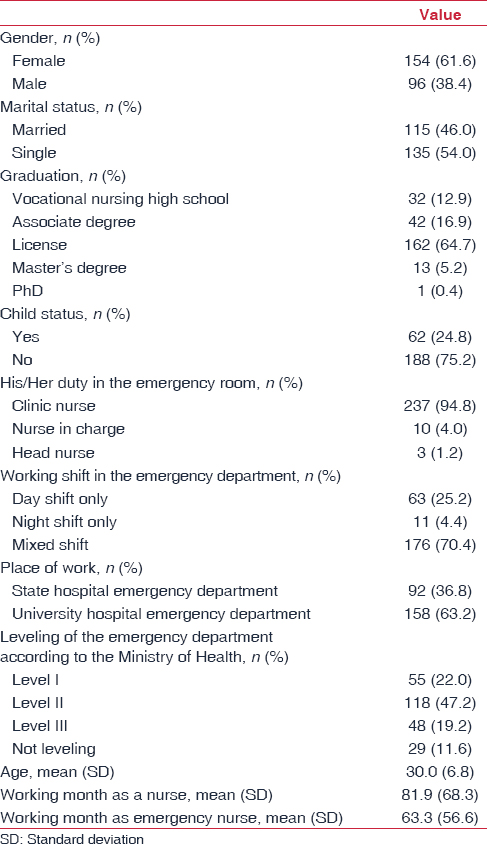 Test–retest reliability
ICC results of the first and second application of all items, life and death situation subscales were 0.98, patients’ and families’ actions and reactions were 0.96, technical and formal support were 0.96, and the conflicts were 0.96, and the overall ICC value of the scale was 0.97 [Table 4].

In our study, we evaluated the validity and reliability of the Turkish version of the SSEN. In order for a scale used in one culture to be used in another culture, the process should not be a “translation” process, but an “adaptation” process, because translating one scale into another language significantly changes the nature of that scale. This inevitable change comes from differences in conceptualization and narration. To minimize the differences, the items of the scale should be examined carefully. To be meaningful in the translated language, it is necessary to make the necessary transformations and standardize the individuals using the translated language according to the norms. Translating the scale from the original language to the target language and back translation techniques are the first and most used step in scale adaptation.[9,15]

Translation and back translation studies on the language validity of the stressor scale for emergency nurses (SSEN) were conducted according to the MAPI Research Institute guidelines.[16] CVI was used to evaluate the scope validity. A CVI score above 0.80 indicates that the validity of the scope is achieved.[17,18] In this study, CVI was determined as 0.92 (0.78–1.00). This value indicates that the content validity is high.

Factor analysis is frequently used in nursing research to evaluate construct validity. [19] As a result of the analysis, the structure consisting of four factors whose eigenvalue is above 1 explains 69.19% of the total variance. In the literature, it is stated that 50% and above variance rates are accepted as valid.[14]

The reliability coefficient that can be considered sufficient in a measuring instrument should be as close to 1 as possible. If the alpha coefficient is <0.40, the measurement tool is not reliable, low reliability between 0.40 and 0.59, highly reliable between 0.60 and 0.79, and highly reliable between 0.80 and 1.00.[21] The original study of the SSEN developed by Yuwanich et al. was conducted on 405 emergency nurses. The Cronbach’s alpha value for each factor of the scale was found to be between 0.89 and 0.93.[22] In our study, Cronbach’s alpha value of the scale was found to be 0.90. This value is in parallel with the original development study of the scale and it is stated that it is very reliable in the literature.

To test the invariance of the SSEN against time, 40 nurses were readministered at 3‐week intervals and the results were evaluated using ICC analysis. In the methodological studies, it is reported that the number of individuals to be retested should be at least 30 in testing invariance against time.[23] In this study, retesting was performed on 40 individuals and therefore it was accepted as a sufficient number. The ICC value varies between 0.00 and 1.00, reliability is good for values between 0.60 and 0.80, and values above 0.80 indicate that the excellent degree.[24] In the original study by Yuwanich et al., the ICC value of the scale was found to be 0.89.[22] In our study, it was found to be 0.97. This value shows that the test–retest values of the scale are excellent in parallel with the original study.

In line with this result, it is recommended to evaluate the validity and reliability of the scale in larger multicenter sample groups.

The authors contribute to the data collecting and writing of the manuscript. We thank Su Ozgur for statistical analysis and all participants for their collaboration.