Efficacy of adding midazolam to paracetamol in pain control of patients with a primary headache: A randomized, clinical trial study

OBJECTIVES: This study aimed to determine the effect of adding intravenous midazolam to paracetamol in the treatment of patients with primary headache referring to the emergency department.

CONCLUSIONS: Based on our primary and secondary outcomes and the results of the study, we conclude that adding intravenous midazolam to paracetamol do not improve the therapeutic response ratio over time, but the effect of this intervention appeared after 1 h.

Headache is one of the common reasons that people are referred to emergency wards.[1] Most of the referrals include primary headaches, of which tension headaches and migraines are more common.[2] Tension‐type headache (TTH) is the most common form of primary headache and is multifactorial.[3] Migraine headache is more common in women than in men.[4] Psychological stress plays a major role in causing a headache. There is a relationship between stress and headache. How stress causes a headache is often not understood.[5] Stress is a predisposing factor for both migraine headache and TTH.[6,7]

In previous studies, the value of nondrug treatments such as relaxation, cognitive‐behavioral therapy, and biofeedback has been evaluated, and their effectiveness has been reported.[8] In an epidemiological study, people with intermittent headache experienced more stressful events than the control group.[9] A study by Cathcart et al. showed the relationship between headache and stress in patients with chronic headache for the first time.[10] Schramm et al. concluded that there was a relationship between stress intensity and headache frequency.[11] Despite the result of these studies, in routine practice, we use only analgesics and antiemetic to reduce the pain of headache.[12,13]

Midazolam is in the category of benzodiazepine drugs, and its effect is short and is used for sedation and short‐acting anxiolytic.[14] Midazolam and propofol are used for sedation in the Intensive Care Unit. Propofol is similar to midazolam in terms of its pharmacologic profile, and studies have shown a similar efficacy and safety for both drugs in relaxing patients, but midazolam is less expensive than propofol.[15] Soleimanpour et al., in comparing the effect of intravenous dexamethasone and intravenous propofol in the treatment of patients with resistant migraine headache, showed that intravenous propofol is an effective and safe drug in the treatment of these patients.[16]

Considering the fact that one of the factors exacerbating migraine headaches and TTH is stress and anxiety based on previous studies, this study examines the effect of adding midazolam with a sedative dose to paracetamol to treat the patients with primary headache.

This was a double‐blind, randomized, clinical trial study conducted in the two emergency departments (EDs) in a large city affiliated to the University of Medical Sciences during a 12‐month period (March 2017–2018). The inclusion criteria included the patients over the age of 18 years suffering from primary headache (migraine and tension) referred to the ED. The exclusion criteria included sensitivity to the study drugs, disorder in neurological examination, and secondary headaches, vomiting, pregnancy, disturbance of consciousness, liver failure, lactation, renal failure, mental disorder, no cooperation from the patient, receiving another drug during 6 h before referral to the emergency department, and unwillingness to participate in the research.

In order to determine the sample size, initial information was obtained from the study of Faridaalaee et al.[12] Considering a confidence coefficient of 0.95 and an 80% power with using G*Power, Heinrich Heine Universitat Dusseldorf, Germany, the minimum sample size with a clinical significance margin of 30% in the mean, 49 samples were calculated for each group. Given a 20% dropout rate, the sample size was increased to 60 in each group. The total sample size was thus 120.

We included 120 patients with primary headache to the study. Primary diagnostic criteria were based on the International Classification of Headache Disorders‐II (ICHD‐II).[17] We described the all ethical aspects of our study and medicines to the patients. Demographic data and type of headache were recorded based on the ICHD‐II criteria and emergency physician opinions who were faculty member of the university and attended in the ED. The primary severity of headache patients was based on the Visual Analog Scale (VAS).

Randomization
Patients were divided into two‐person blocks based on the Random Allocation Software, and then, the two groups of treatment case (paracetamol plus midazolam) and control (paracetamol plus placebo) were defined in the software. The randomization was done based on the results. The analysis strategy was intention to treat. Figure 1 shows a flow chart of patients in the study. 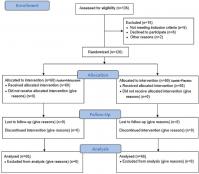 Figure 1. Flowchart of the patients in the study
× 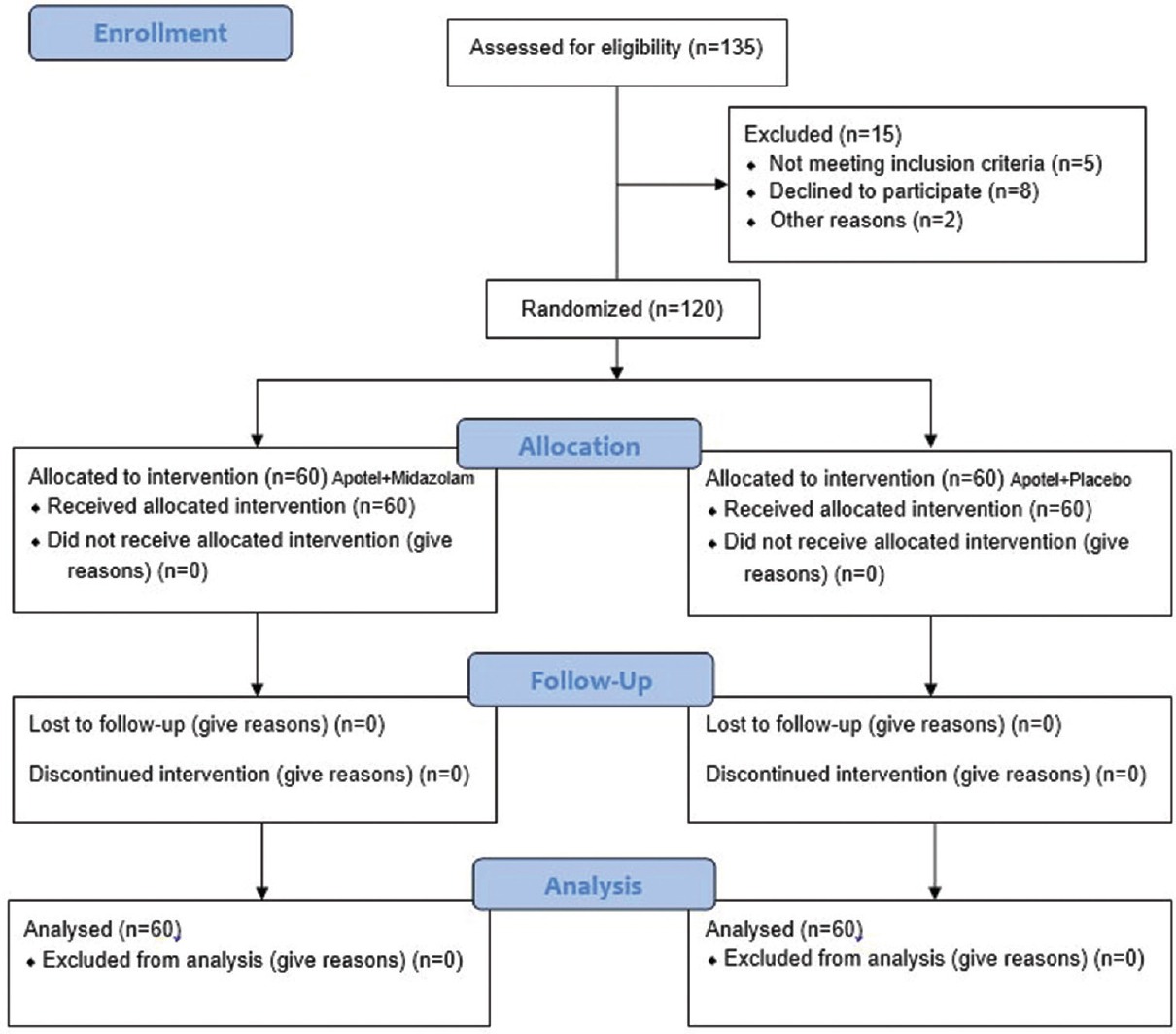 Blinding
For blinding, syringes‐containing diluted midazolam or distilled water (syringes numbered 1 and 2) was prepared by the project executive. Neither the patients nor the treatment staff knew the contents of the syringes.

Intervention
The primary outcome variable was the control of pain in patients, and the secondary variable was their satisfaction. Paracetamol Ampoules© (Apotel, 1 g, 6.7 cc, cobel darou, Tehran, IR Iran) was dissolved in 100 ml of normal saline serum and infused into all patients within 10 min. The dose of acetaminophen was calculated at 15 mg/kg (not over than 1 g). Midazolam ampoule (1 cc, 5 mg, Darou Pakhsh, Tehran, IR Iran) at a relaxation dose of 0.02 mg/kg was intravenously and slowly injected to the patients in the treatment group at the onset of paracetamol administration. Placebo was 2 cc normal saline serum. All medicines were administered intravenously by an expert emergency nurse under the supervision of the researcher.

In two groups of the study, during administering the medicines, the researcher was at the bedside of the patient and monitored him/her. Fortunately, no special event occurred during the study, but the oxygen and devices that used to maintain the airway and breathing were in the bedside of patients. Furthermore, we prepared metoclopramide and opiate in resistant cases, but we never used them.

Outcome
The primary outcome variable was pain reduction across the time, and the secondary outcome variable was patient satisfaction about the treatment. The severity of pain in patients was recorded with the VAS at 15, 30, and 60 min after injection. The success of treatment and definitive pain control (i.e., pain intensity <3) were defined by the VAS criteria. Patient satisfaction at the end of the treatment period was recorded in the ED using the VAS criteria, where a score of 10 represents the highest satisfaction and 1 the lowest satisfaction. We use continues numeric type of this scale in our study. One hour after administration the medicines, we did not observe the failure of treatment based on our treatment goals.

Statistical methods
All the data were analyzed using the SPSS software version 22.0 (Chicago). Descriptive statistical methods (mean ± standard deviation) of frequency and percentage and median were used for the statistical analysis of the obtained data. Normal distribution of the data was examined using the Kolmogorov–Smirnov test. A Chi‐square test was used to compare the qualitative data in both groups. Because of the distribution of pain scores in different time and satisfaction levels were abnormal based on the Kolmogorov–Smirnov test (P < 0.05), for analysis of these data we used Mann– Whitney U‐test. In all cases, P < 0.05 was statistically significant.

Table 1. Comparison of demographic status in two groups of patients

Table 2. Comparison of treatment response in two groups of patients at different times after treatment onset and their satisfaction

The headache is a common complaint and accounts for nearly 5 million visits in the USA per year. Headaches are divided into two groups of primary and secondary headaches. Primary headaches include cluster, migraine, and tension, which seem to constitute the majority of emergency headaches.[18] However, most patients who come to the ED with headache often have a benign headache, but no serious and life‐threatening causes should be ignored.[19] An important challenge for an emergency physician is to identify a headache that is a sign of a serious and life‐threatening illness.[18]

The treatment medicines used for migraine headaches in the emergency wards include intravenous fluids, antidopaminergic, butyrophenones, metoclopramide, triptans, dihydroergotamine, nonsteroidal anti‐inflammatory drug (NSAID), chlorpromazine, and metoclopramide, and for tension headaches include NSAID; chlorpromazine and metoclopramide.[1] For cluster headache, oxygen, subcutaneous sumatriptan, dopamine antagonists, and sometimes, corticosteroids are also used.[13] Opiate use is not recommended as a first‐line treatment due to complications and prolonged stays in the emergency ward.[20]

Friedman et al. examined the effect of adding intravenous diphenhydramine to metoclopramide as an adjunct therapy in migraine treatment, and finally, concluded that diphenhydramine did not improve the outcome of migraine patients.[21]

Soleimanpour et al. examined the effect of intravenous dexamethasone compared with propofol in reducing the pain of migraine headache patients. Pain relief was significantly more effective after propofol treatment, and Soleimanpour et al. concluded that propofol is an effective and safe intravenous medicine for patients with migraine referred to the emergency ward.[16] In a study by Faridaalaee et al. on comparing the effect of paracetamol with metoclopramide on the treatment of primary headaches in the emergency ward, it has been concluded that the effect of metoclopramide on the treatment of primary headaches is less than paracetamol.[12]

Among the limitations of the study were no long‐term follow‐up of patients and a small sample size. We did not register the vital sign, comorbidities, and other variables of patients, and also we did not count the number of secondary headaches that we excluded from the study. Another limitation of our study was that we did not check the stress levels of patients before intervention. In considering midazolam as a new treatment for headache, treatment refusal by patients was another limitation of the study.

Based on our primary and secondary outcomes and the results of the study, we conclude that adding intravenous midazolam as a sedative agent to intravenous paracetamol do not improve the therapeutic response ratio over time, but when we added midazolam to paracetamol for the treatment of primary headache, the effect of this intervention appeared after 1 h, and there was no difference in treatment efficacy of adding midazolam between the two treatment groups before that. Furthermore, the patient satisfaction was significantly higher in apotel + midazolam group.

Further studies with larger sample sizes and long‐term follow‐up of patients for relapse or long‐term satisfaction are recommended. It is also recommended that the effect of adding oral benzodiazepine as a prophylactic agent to routine treatment in patients with recurrent attacks of primary headache or chronic headache be studied, also it is recommended that in future studies the stress level of patients will evaluated.

The authors are grateful to all participated in the study. This article was written based on dataset of M.A. thesis entitled “The Effect of Adding Intravenous Midazolam to Apotel® in the treatment of patients with primary headache referred to the emergency department,” registered in our University of Medical Sciences (No: 94/1‐5/19 January 02, 2016).