INTRODUCTION: The long-term trends of medical students’ choice for emergency medicine (EM) in Turkey are unclear. With this background, we aimed to determine the change in the rate of EM preferences of students over the years.

METHODS: This was a cross-sectional study originated from 6th-year medical students’ feedback forms, to examine trends of EM carrier preferences between 2005 and 2018 in a tertiary care academic emergency department. There are two main questions containing “would you choose EM as a specialty?” and “why?” as open-ended questions in the form. The answers to the open-ended question were classified as six main factors, which were perception of work, lifestyle, nature of work, personal job preference, mentorship/department experiences, and income.

CONCLUSION: The rate of EM choice of medical students doubled during the study, and approximately one in three students stated that they could choose EM as their future career in the past year. Perception of work was the main factor for choosing or rejecting to EM.

Medical students’ career choices are very important for the development of a specialty, the continuation of the workflow and even the survival of that specialty. Several factors have been identified in the studies conducted in different countries on the selection of specialties and emergency medicine (EM) in the literature.[1‐5] From the point of view of EM, controllable lifestyle (CL) that allows the physicians to control the number of working hours,[1] mentors and role models, residency length, and salary expectations[2] are among these factors in the United States (US) settings. Medical lifestyle, hospital orientation, and varied scope of practice in Canada,[3] experience of jobs and self‐appraisal of own skills in the United Kingdom (UK),[4] and bioscientific orientation as non‐CL group (contrary to US) in Japan[5] are factors for choosing EM among medical students or junior doctors.

Although EM is a relatively new discipline, which was established in 1993 in Turkey, it has since evolved at an increasing rate.[6] The number of EM training programs rose from 23 in 2006 to 95 in 2017 in Turkey. While there were 300 EM residents and 250 attendings in 2006, there were 953 residents, 1445 attendings, and 250 academic staffs in 2017.[7,8] The popularity of EM among medical students has been increasing over the years;[9] however, the data of long‐term trends regarding career choice for EM are insufficient both in the literature and in Turkey.

In this study, we aimed to determine the long‐term trends of medical students’ career choice for EM as a specialty during 14 years. Second, it was aimed to investigate the factors for choosing or rejecting EM with open‐ended questions over the years.

Study design
This study was planned as a cross‐sectional study originated from 6th (final)‐year medical students’ feedback forms to examine trends of these medical students’ EM carrier preferences between 2005 and 2018 in a tertiary care academic emergency department (ED) in Ankara in Turkey. The study was approved by the Institutional Ethics Review Board with number 26.07.2019/08.

Study setting and population
This academic ED where the study was conducted, was established in 2001, and there is a mandatory EM internship that lasts for 6 weeks (8 weeks before 2011) for 6th‐year medical students in this department. In this period, there are 2 h of theoretical lessons per week for these students. At other times, according to 12‐h shift times, they follow‐up patients and make basic procedures in the clinic every other day (totally about 40 h/week).

In 2005, a paper‐based feedback form consisting of four sections was designed to learn 6th‐year medical students’ viewpoints on the EM internship process, theoretical and practical education, and EM specialty as a career choice [Appendix 1]. These forms are voluntarily filled by these students at the end of each EM internship since 2005. The forms are evaluated by the internship training coordinator, and necessary arrangements are made regarding positive or negative feedback. These arrangements, if deemed appropriate by the academic committee, include the changes in the number and content of theoretical and practical trainings, correction of the problems in the functioning of ED, and even redefining the intern duties and responsibilities. In the first three sections of the feedback form, there are 47 questions on the basis 5‐point Likert scale (strongly disagree to strongly agree). In the last fourth section, there are two questions containing “Would you choose EM as a specialty,?” in which one indicates “yes,” “no” or “do not know,” and “Why?” as open‐ended questions.

In terms of data set in the last section, EM career preferences were classified into three groups, as mentioned above. On the other hand, the factors affecting the career choices of medical students are not standardized, and almost every study conducted in different countries has identified different influencers in the literature. Moreover, even the term “lifestyle” can be used in different definitions in studies.[10] After evaluating approximately 300 questionnaire data and reviewing the literature,[2‐5,11,12] we classified the answers to the open‐ended question as six main factors, which were perception of work, lifestyle, nature of work, personal job preference, mentorship/department experiences, and income. Each main factor includes both positive and negative opinions. For example, a positive perception of work included high job satisfaction such as interesting and exciting statements, and negative perception of work included challenging work environments such as intense, exhausting, and stressful statements. All main factors are detailed in Table 1. Further, students could specify more than one reason for open‐ended questions; all answers were entered into the data set in this field.

The characteristic analysis was not evaluated in this study because personal information was not requested in the forms such as gender and age. As this study was originated from feedback forms, consent form could not be taken from the students. In addition, they were not informed about any stage of the study.

Figure 1. Medical Students' thoughts on the choice of emergency medicine as a specialty between 2005 and 2018
× 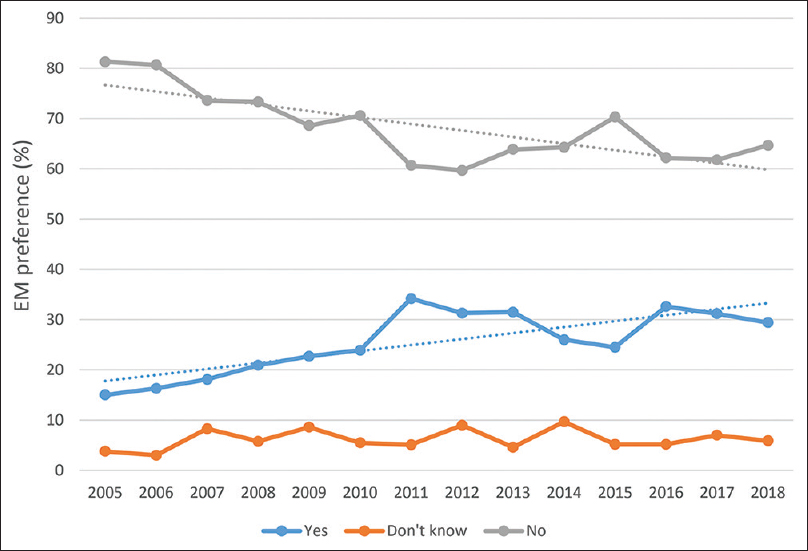 Table 2. Answers (opinions) for the open-ended “why” question

Figure 2. The trends of factors related to negative opinions
× 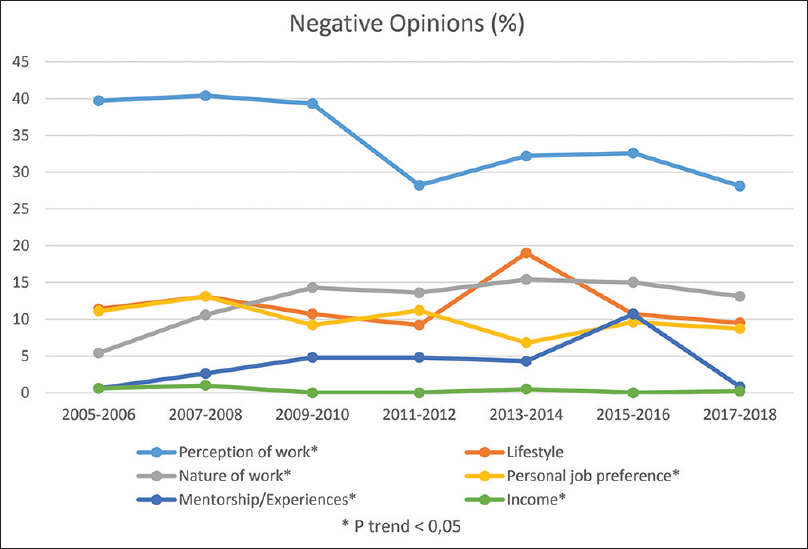 Figure 3. The trends of factors related to positive opinions
× 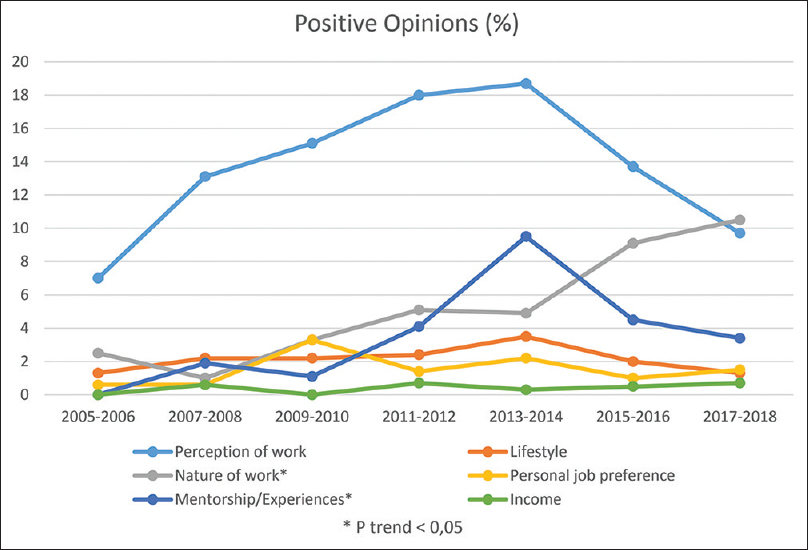 In a study conducted in the US reported that EM has been attracting a growing portion of medical students from 3.1% for women and 4.3% for men in 1990 to 6.4% for women and 8.3% for men in 2003.[14] In another study in the US, 15% of 4th‐year medical students declared EM as one of their top three specialty choices after EM clerkship between 2008 and 2011.[15] The proportion of UK‐trained medical graduates (1 year after graduation) who wanted to choose EM for a long‐term career increased from 4.8% between 2005 and 2008 to 5.6% in 2015; however, this increase was not statistically significant.[16] A total of 6.1% of medical students cited EM as their first career choice at medical school entry in Canada between 2001 and 2004. In the same study, 52.8% of students stated that they would consider a career in EM, even though not as their top career choice.[3] In Saudi Arabia, 7% of undergraduate and postgraduate medical students indicated EM as their first choice specialty in the 2016/2017 academic year.[17] A study conducted in Turkey in the 2012/2013 academic year reported that the most satisfied internship was EM for 5th‐ and 6th‐year medical students; however, EM did not take place in the list of top ten of first choice specialties.[9] In the current study, 26.5% of the 6th‐year students indicated that they could choose EM as a specialty between 2005 and 2018. This rate was 15% in 2005 and rose to 29% in 2018. This increase was statistically significant. The rate of EM preference was higher in this study compared to other studies. The reason for this may be only asking questions about EM and not including other specialties. Another reason may be that the question does not specify any order of specialty preference. Nevertheless, these results indicated that the rate of selectivity of EM has increased significantly in this study.

Medical students choosing or rejecting a career in EM have various profiles of expectations, priorities, and influences. Therefore, different factors affecting the choice or rejection of specialization were identified in the literature. In terms of positive influence for EM, lifestyle and residency length are the push factors for the medical students in the US.[2] The most influential factors for EM choice of long‐term career were enthusiasm/commitment, experience of jobs so far, and self‐appraisal of own skills among junior UK graduates.[4] Medical students were more influenced by medical lifestyle, hospital orientation, and varied scope of practice in Canada.[3] As a non‐CL, bioscientific orientation influenced medical students and junior doctors in Japan.[5] In the current study, the most common influencer was the perception of work that was stated as nearly half of the positive reasons. However, while its rate increased until 2013–2014 years, the rate began to decrease after these years. The nature of work and mentorship/department experiences accounted for one‐third of positive reasons. The trends of these two factors showed similar fractures in the same years, but their increase rates were significant contrary to that of perception of work. One of the most important determinants of this study was the collection of data from the feedback forms which were filled after an internship program. Therefore, any change in the functioning of the department may affect the results. In 2015, a busy 5th‐year medical students program also started for EM, and the majority of the department’s work was allocated to this field. In addition to the functioning of the department, other reasons such as the changes in health policies may also have caused this situation. In the same years, the number of students starting EM internship doubled.

In terms of rejecting EM for specialty, doctors were most likely to specify reasons relating to work‐life balance in the UK.[12] In another study conducted in the UK reported that work–life balance was stated by 70.5% of the doctors who rejected EM, and this rate was 38.6% for other rejected specialties. Job content was the second common reason for rejecting EM in the same study.[4] Perception of work was the most common negative reason for nearly half of the responses such as positive responses in the current study. It was seen that the rate of the negative perception of work for EM decreased over the years. The nature of work and lifestyle accounted for one‐third of the negative reasons, and the rate of negative nature of work increased during this period.

Strengths and limitations
The main strengths of the study are that it is a long‐term study almost since the establishment of the EM training program in the hospital, and it has a high response rate for this type of study. There is no study related to long‐term trends and results of EM choice as a specialty in Turkey.

Its main weakness is that the entire contents of the form could not be used for the study, because the intern feedback forms, which are the source of the study and were mainly created for the development of EM internship and training program. Another limitation was that the characteristics of the participants were not requested when creating the forms, and therefore, could not be presented in the study. Finally, as the study was performed in a single center, it may not be appropriate to generalize the results. For example, if another university has a different internship program, these rates may vary widely.

During the study, the proportion of EM choice of 6th‐year medical students doubled. In the last year, one in three medical students stated that they could choose EM as a specialty career. Perception of work was also the main factor for choosing or rejecting to EM. It was suggested that national multicenter studies with comprehensive methodological design including demographics and departmental characteristics should be planned to confirm this trend and predict the changing factors to choose EM as a career specialty over the years.

The study was approved by the Gazi University Institutional Ethics Review Board with number 26.07.2019/08.