OBJECTIVES: Pulmonary embolus (PE) is a form of venous thromboembolism associated with increased morbidity and mortality if not diagnosed and treated early. Variations in clinical presentation make the diagnosis challenging. The gold standard for diagnosing PE is a computed tomography pulmonary angiogram (CTPA). Physicians show a low threshold for over-investigating PE. The evaluation of patients with suspected PE should be efficient, including but not limited to the use of risk stratification methods. This study aims to assess the adherence to the recommended diagnostic pathways of ordering CTPAs in patients with suspected PE.

METHODS: This retrospective cohort study included patients above 18 years of age who received a CTPA for a suspected PE in the emergency department (ED) of a hospital between 2015 and 2019. Patient demographic data, chief complaint, variables of the Wells and pulmonary emboli rule out criteria scores, pregnancy status, investigations, and the patient’s final PE diagnosis were extracted from the hospital electronic medical records. Diagnostic pathways that took place were compared to the internationally recommended pathway.

CONCLUSION: Our study revealed that approximately two-thirds of all CTPA requests did not adhere to the recommended PE clinical decision pathway. There was a significant improper and unnecessary utilization of CTPA imaging and D-dimer testing. Improvements seem imperative to enhance physicians’ clinical approach to PE diagnosis.

Pulmonary embolus (PE) is a form of venous thromboembolism with about 2 million cases reported annually and estimated mortality of 3% from PE alone.[1] The clinical presentation of PE is variable and often nonspecific, making the diagnosis challenging and may cause high morbidity and mortality.[2,3] Therefore, physicians tend to have a low threshold for over investigating PE.[3,4] This low threshold usually results in unnecessary testing, contributing to prolonged emergency department (ED) lengths of stay, financial burdens, and patients’ exposure to the adverse effects of investigation.[5] Computed tomography pulmonary angiography (CTPA) remains the modality of choice in evaluating patients with suspected PE because of its high sensitivity and accuracy.[6] Although CTPA has become the standard investigation modality of PE, it carries risks such as radiation exposure and contrast induced nephropathy.[7 9] Therefore, efficient clinical decision making strategies, including risk stratification methods, are recommended.[3]

The European Society of Cardiology and the American College of Physicians’ guidelines on diagnosing PE suggest using validated clinical prediction rules such as the Wells and Pulmonary Emboli Rule Out Criteria (PERC) scores to estimate pretest probability in patients for whom acute PE is being considered.[3,10] However, non adherence to clinical decision making pathways and unnecessary testing in the diagnosis of PE is widely reported.[5,11 14] Middle eastern data are still limited. A recent study in the Gulf region found that one third of CTPA studies did not adhere to recommended pathways.[11]

This study aims to assess the adherence to the recommended diagnostic pathway of ordering CTPA for ED patients with a suspected PE in our setting.[3,10]

The study was a retrospective cohort study conducted in the ED of a community based teaching hospital located in the city of Alain in the United Arab Emirates. The ED operates 24 h a day, 365 days a year, and has a 50 bed capacity, with an average of 115,000 patients annually. Patients coming to the ED would initially be assessed in the triaging area by a licensed emergency medicine physician or general practitioner and allocated to different areas of the ED based on the acuity and clinical condition of the patient. Full capacity blood testing and specialty consultations are 24 h availability in this tertiary care hospital. In addition, a CT scanner is located in the ED.

All patients above 18 years of age who presented to the ED with a suspected PE and underwent a CTPA in the ED between January 1st, 2015, and December 31st, 2019, were reviewed. Because our study focused on the adherence of ED physicians, CTPAs ordered by admitting specialty physicians, such as internal medicine and critical care physicians, were excluded. CTPAs ordered by ED physicians were analyzed.

The patient data were extracted from the electronic medical record system in the hospital, Citrix Cerner®. Individual patient charts were opened using the medical record number, and the data were coded into an Excel sheet. A random sample of patients was selected to check data accuracy at regular intervals. Data included patient demographics of age, sex, pregnancy status, D dimer result, CTPA results, and continuous and categorical data, including the variables of both the Wells and PERC scoring systems [Appendix 1].[15,16]

The Siemens Sysmex CS 5100 System with a cutoff level of 0.5 mg/L was used for D dimer. A licensed radiology technician performed the CTPA scans using the Siemens Somatom Definition AS 128 slice Scanner, injecting 50 ml of Optiray® (Ioversol) 350 contrast at 4.0 ml/s. The CTPA images were interpreted and reported by a licensed radiologist physician. 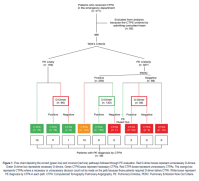 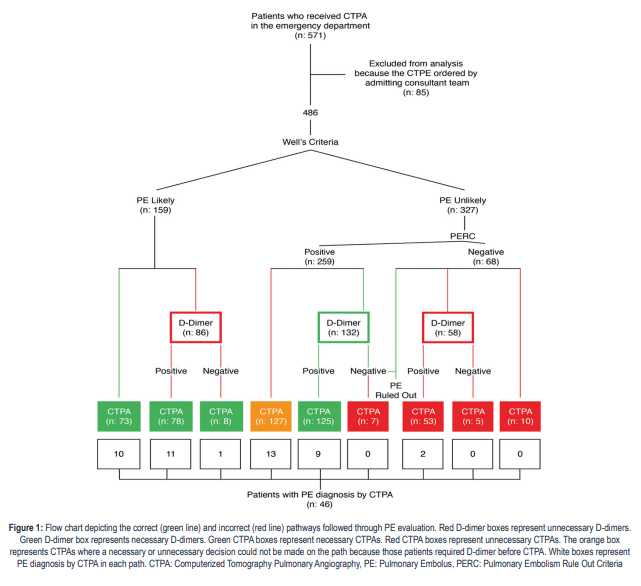 Of 486 patients, the recommended PE clinical decision making pathway was not followed correctly in 288 patients (59.3%). Table 1 provides information about the types of nonadherence. 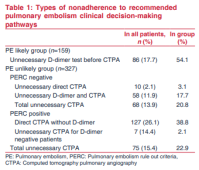 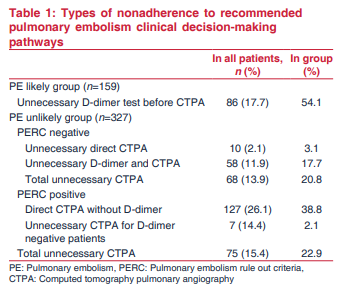 Only 284(58.4%) CTPAs were considered necessary in our setting. 75 (15.4%) CTPAs were unnecessary according to the recommended PE clinical decision making pathway. 127 (26.1%) patients who received CTPA were in an undetermined group (neither necessary nor unnecessary) because they were in PERC positive group and should have received a D dimer test to determine the need to proceed to CTPA instead of a direct CTPA.

In our setting, the PE clinical decision making pathway was incorrectly followed for most patients. In addition to ordering unnecessary CTPA for patients, there was a considerable amount of incorrect usage of D dimer testing in the ED. As expected, CTPAs ordered after correctly following the PE clinical decision making pathway diagnosed more PEs as compared to PEs diagnosed by incorrectly ordered CTPAs.

CTPA is considered the gold standard diagnostic modality for PE.[6] International guidelines suggest using validated clinical prediction rules such as the Wells and PERC scores to estimate pretest probability in patients suspected to have an acute PE.[2,10,19] Wells score alone is used to rule in PE as it has a relatively high specificity.[17] It was also reported that if paired with D dimer testing, specificity would increase up to 99.7%.[15]

The overuse of the D dimer to screen for possible PE has been found to add to the cost of healthcare and increase the frequency of testing for PE among very low risk patients, leading to large numbers of negative CTPA in young patients, increasing the risk of malignancy secondary to radiation exposure.[9,13,16] Therefore, Kline et al. derived and tested the PERC rule to justify not ordering a D dimer. Applying this rule in the low risk populations yielded sensitivities of 96%100% and specificities of 15%27%.[16] The combination of Wells and PERC to diagnose PE provides additional accuracy and protects against unnecessary investigations.[8]

Our study identifies the overutilization of CTPA in the ED, which is congruent with several other studies globally,[11 13] although no studies provide optimum adherence levels. Our study shows that the majority (59.3%) of CTPA being ordered for patients suspected to have a PE did not adhere to internationally validated guidelines.[2,8,19] The amount of inappropriately ordered CTPA was on the higher end when compared to studies, which report rates from 16.8% to 43%.[11 14,20] Out of the 75 unnecessarily ordered CPAs, only 2 (2.7%) were positive for PE, subjecting 73 (97.3%) patients out of 75 who underwent the unnecessary CTPA to unnecessary ED waiting times, costs, and an increased risk of CTPA side effects. We could not compare our results to other literature as no literature was found delineating results of unnecessary CTPAs from CTPAs done with nonadherence to the pathway. We believe this finding is significant and should be addressed for institutional improvements.

D dimer was ordered 29.6% unnecessarily in our study. Al Dandan et al. and Osman et al. reported unnecessary D Dimer order at 41.2% and 15%, respectively.[11,13] They also reported the issue of underutilizing the D dimer test with PERC positive patients and skipping straight to CT, which was 57% of all PE unlikely cases for both studies. Underutilization of D dimer testing when required and skipping straight to CTPA happened in 38.8% of all our PE Unlikely cases, which is almost half the amount reported by Al Dandan et al. and Osman et al. [11,13]

The overall yielding of positive PE in CTPA in our population is 9.5%, similar to the generally accepted threshold of 10% for the positivity rate for CTPA.[21] In our study, when the pathway was not appropriately used and unnecessary CTPAs were ordered, the PE detection rate was four times lower than when the CTPAs were ordered according to PE clinical decision making pathway. This implies significantly reduced sensitivity when not following the pathway, which was also shown by Roy et al. and Yan et al. who highlighted that implementing using the tools and following clinical decision making pathways before ordering CTPAs resulted in a significant reduction in CTPA utilization with a resultant increased positive CTPA rate.[14,19] All our PERC negative patients did not have a PE on the CTPA that was subsequently performed, confirming the safety of not performing CTPA scans in these patients. This adds further support to the PERC tool developed by Kline et al., which states that low risk patients who satisfy all criteria do not need D dimer testing or further imaging investigation.[16]

The direct cause for our unnecessary CTPA and D dimer was improperly following the recommended pathway. Indirectly attributing causes could have been individual factors such as the different methods of approach between physicians, distrust of clinical decision rules, fear of litigation, and insufficient understanding of radiation exposure.[8] Environmental factors such as ED patient load and flow and shift timings and duration could also play a role.[18] An important contributing factor to over utilizing CTPA could be the availability of CTPA with a rapid turnaround time that is available free of charge for all citizens, which was also noted in a similar study in the Gulf.[11] The underutilization of D dimer assay testing when necessary is due to non adherence to the recommended pathway, which could be attributed to the reluctance to order the test due to the high frequency of false positive results.[9]

A combination of in house training sessions, adopting computerized physician order entry systems, and utilizing performance feedback reports have been proven to improve adherence to recommended diagnostic pathways, reduce the overutilization of imaging, and enhance physicians’ approach to diagnosing PE.[14,19,25,26] Lacking a written diagnostic algorithm to score the clinical probability of PE in suspected patients was also an obstacle adding to the inappropriate workup.[14]

This was the first study in the country to assess the utility of risk stratification tools in diagnosing pulmonary emboli in the ED. Being a single center study may limit the generalization of the results to other settings. Another limitation is the study’s retrospective nature, as scores were calculated retrospectively, and there was the risk of over calculating or under calculating the Wells score. However, researchers did their best to apply scores with available objective data in the files and randomly cross checked their accuracy. An important limitation was using a generalized D dimer cut off level and not an age adjusted cut off level. Finally, this study was conducted on data obtained before the emergence of the COVID 19 pandemic. Therefore, the pandemic might affect and change current practice and usage of PE clinical decision making pathway in many settings.

Our study revealed that about two thirds of CTPAs ordered did not adhere to the proper recommended clinical decision making pathway, with a substantial amount of unnecessary CTPAs and improper utilization of D dimer testing. The study also highlighted that adherence to PE clinical decision making pathway increases the chance of diagnosing PE with CTPAs. Further studies are required to elaborate on the influencing factors for the evident nonadherence.