Abdominal tetanus is the rarest presentation of localized tetanus in which other muscles are not involved. Proper diagnosis is challenging as it mimics acute abdomen. We describe the challenges in diagnosing this atypical localized tetanus in an adult and a review of case reports. Our patient is a 40 year old male who presented to the emergency department with generalized abdominal pain for 3 days. His physical examination revealed a guarded abdomen with tenderness in the epigastric region, while systemic examinations were unremarkable. The initial diagnosis was acute abdomen with suspected perforated viscus. Subsequently, he developed arching of the back on day 3 of admission with markedly elevated serum creatine kinase levels. A diagnosis of localized tetanus was made, and an uneventful recovery was achieved after management. Clinicians should be aware of the atypical presentations of abdominal tetanus as it mimics acute abdomen. Early recognition and initiation of treatment significantly reduce morbidity and mortality risks.

Abdominal tetanus is a fatal infectious disease and the rarest presentation of localized tetanus caused by Clostridium tetani. Unlike the most common generalized form of manifestation, abdominal tetanus presents with localized rigidity of the abdominal wall musculature while preserving other groups of muscles.[1]

Establishing a diagnosis of abdominal tetanus is challenging as it mimics acute abdomen. The differential diagnosis should include the other possible causes of the acute abdomen, as the manifestation of the disease only involves the muscle groups of the abdominal wall. The marked similarity between presenting manifestations and common causes of peritonitis causes a challenging diagnosis.[2] We describe the challenges in diagnosing this atypical localized tetanus in adults and a review of case reports.

A 40 year old male with no chronic medical or surgical history presented to the emergency department (ED) with generalized abdominal pain for 3 days. He denied having fever or vomiting before admission. During the presentation, he was conscious and alert; his blood pressure was 118/68 mmHg, pulse rate was 98 beats per minute, saturation was 98% on room air, the temperature was 37.1°C, and pain intensity score was 10/10. Physical examination revealed generalized tenderness all over the abdomen, with guarding present, which appeared to be maximal in the epigastric region. Otherwise, there was no organomegaly or pulsatile mass, and his bowel sound was normal. Systemic examinations of the cardiovascular system, central nervous system, and musculoskeletal system were all unremarkable. Laboratory investigations were performed and showed a hemoglobin (Hb) level of 12 g/dl, white blood cell count of 9.9 × 103 /µL, platelet count of 350 × 103 /µL, and a significant rise in creatine kinase (CK) level, which was 787 U/L (normal range: 38–308 U/L). Other blood parameters, including renal and liver profiles and amylase levels, were within normal limits. Radiographic imaging of the chest and abdomen showed no air under the diaphragm or dilated bowel. A bedside ultrasound of the abdomen was performed; however, there was no evidence of any abnormality. The initial diagnosis was acute abdomen with suspected perforated viscus; hence, intravenous (IV) fentanyl and IV normal saline for maintenance hydration were administered. Oxygen through nasal cannula was given as supportive management despite maintaining saturation on room air. The severe rigidity of the abdomen caused him to become anxious, thus hyperventilating. He was kept under close monitoring, while his pain intensity was observed. Unfortunately, his pain intensity did not subside, and therefore, computed tomography (CT) of the abdomen with IV contrast was performed. However, the findings of abdominal CT showed no abnormalities. He was admitted to the surgical ward for the continuation of care and planned for urgent endoscopy the following day.

On day 2 of admission, he had intense pain with remarkable generalized abdominal muscle wall rigidity. He was then referred to the acute pain service for patient controlled analgesia with IV morphine. Urgent endoscopy was performed and showed Forrest IIC ulcers at the greater curvature. A repeated erect chest X ray was performed to monitor the progression of the disease; however, there was no sign of pneumoperitoneum.

On day 3 of admission, the patient developed arching of the back with persistent abdominal rigidity [Figure 1], and the CK level increased to 10,860 U/L. However, despite the progressive increase in CK levels, there was no evidence of acute kidney or liver injury. His urea was 4.6 mmol/L, creatinine was 68 µmol/L, aspartate aminotransferase was 25 IU/L, alanine aminotransferase was 70 IU/L, and alkaline phosphatase was 50 IU/L. History was reviewed, and the patient admittedly had a nail prick injury 10 days ago. A local examination of the wound of his right heel showed an inflamed punctured wound with surrounding skin redness. However, there was no pus discharge or foul smelly odor from the wound. There was no history of tetanus vaccination before, in which a further confirmatory test was performed with a negative serum tetanus antibody level. A revised diagnosis of localized tetanus was made. Treatment with tetanus toxoid and human tetanus immunoglobulin were administered. He was covered with broad spectrum antibiotics, and administration of IV midazolam was initiated to control the muscle spasm. His CK levels increased to a maximum of 26,510 U/L before declining to 2450 U/L. The patient was safely discharged 15 days later. 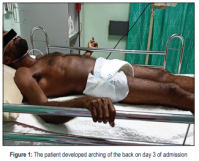 Figure 1. The patient developed arching of the back on day 3 of admission
× 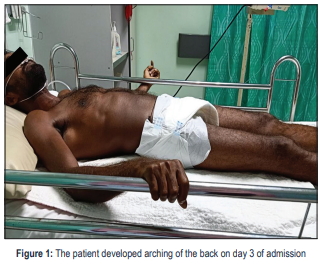 Written informed consent was obtained from the patient to publish this case report and the figure.

Abdominal rigidity has been demonstrated as the earliest sign suggestive of tetanus in adults that mimics an acute surgical abdomen.[4] It is attributed to the spasm of abdominal muscles. A patient presenting with an acute abdomen is commonly seen in the ED, and typical differential diagnoses include intestinal obstruction and perforated viscus. Radiographic imaging may rule out serious causes of acute abdomen.[5] However, a thorough history of traumatic injuries, wounds, or infection and vaccination history should be obtained in a patient presenting with abdominal rigidity. Arching of the back may be an associated feature, and excluding other etiologies is essential. The possible etiologies are psychogenic dystonia and infectious, developmental, or degenerative diseases.

There are six published case reports on localized abdominal tetanus, as summarized in Table 1. All of the cases were male, and most of them did not have any vaccination history.[5,7,9 11] Most of the patients have successful recovery with tetanus toxoid and/or tetanus immunoglobulin, except for two cases that succumbed to death due to atypical presentation and late diagnosis.[6,10] Moreover, the presentation of abdominal tetanus varies at presentation.[5 11] 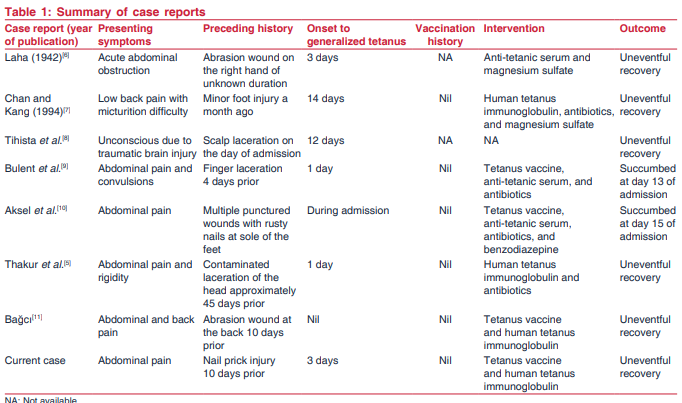 Laboratory investigations and radiographic imaging may aid in evaluating other diagnoses yet are unable to confirm tetanus. Serum CK is an enzyme possibly originating from the contracting muscle tissue that may be elevated in tetanus patients. This is probably due to muscle fiber membrane permeability changes caused by tetanus toxin. CK is released once tetanus toxin enters the blood, commonly occurring 3–4 days before muscle stiffness develops.[12] In our patient, his CK level had significantly increased from the initial value at admission, which helped the clinician raise the suspicion of tetanus when the patient had arching of the back.

However, upon initiation of the treatment, his symptoms and CK level decreased as signs of responding.

As tetanus is diagnosed clinically, clinicians should be aware of the variable presentations of localized tetanus. Early recognition greatly reduces the risks of morbidity and mortality. In addition, CK may serve as an effective laboratory tool in tetanus to assess the prognosis of the disease, monitor the patient’s response to treatment, and predict disease outcomes.

Written informed consent was obtained from the patient for publication of this case report and accompanying images. A copy of the written consent is available for review by the Editor in Chief of this journal on request.

Declaration of patient consent
The authors certify that they have obtained all appropriate patient consent forms. In the form, the patient has given his consent for his images and other clinical information to be reported in the journal. The patient understand that name and initials will not be published and due efforts will be made to conceal his identity, but anonymity cannot be guaranteed.

The author(s) would like to thank the patient for his permission to publish this case report as well as the staff in Hospital Seri Manjung for their continuous support.