Narrow complex tachycardia (NCT) is often due to supraventricular tachycardia (SVT). SVT with aberrancy, preexcitation, paced rhythm, rate-dependent bundle branch block, preexisting conduction defects or SVT due to drugs, and electrolyte abnormality can also be wide complex. Wide-complex tachycardia (WCT) is often ventricular tachycardia (VT), but fascicular VT (fVT) can present as NCT. Thus, WCT can be either VT or SVT. This has been a perplexing problem for the emergency physician for ages. Here, in this case series, we describe the novel use of point-of-care ultrasound to differentiate SVT from VT.

A 50 year old male known to have triple vessel disease (TVD) and recurrent VT presented to the ED with chest pain (retrosternal and diffuse) and breathlessness (NYHA 2–3) for 1 day and palpitation for 1 h. On arrival in the ED, the vitals were pulse rate (PR) of 150/min, blood pressure (BP) of 120/70 mmHg, respiratory rate (RR) of 20/min, and oxygen saturation (Spo2) of 97% in room air. The clinical examination was normal. The 12 lead ECG shows regular wide complex tachycardia (WCT) and a heart rate of 157 beats per min [Figure 1a]. Since the patient had WCT and past history of TVD/recurrent VT, at first glance, it was thought to be VT. However, we could make out a clear inverted discernible P wave in lead II with a clear 1:1 AV association. 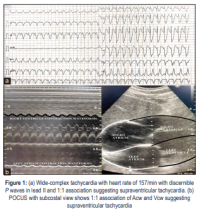 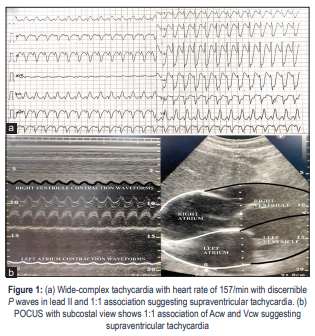 Moreover, POCUS also showed a clear 1:1 association between atrial contraction waveforms (Acws) and ventricular contraction waveforms(Vcws)[Figure1b]. There was a clear cut concurrence with ECG AV association and POCUS findings. Although there was confusion initially, POCUS helped us in clinching the diagnosis (SV WCT) with ease. The patient was initially tried with medical management (adenosine and amiodarone) and finally resorted to synchronized cardioversion.

A 45 year old hypertensive female patient came to the ED with a history of sudden onset palpitation, breathlessness, and giddiness for 3 days. On arrival in the ED, the vitals were PR of 220/min, BP of 110/70 mmHg, RR of 20/min, and SpO2 of 98% in room air. Clinical examination was unremarkable. The 12 lead ECG showed regular WCT with a heart rate of 220 beats/min and no discernible P wave [Figure 2a]. As per the Brugada algorithm, the rhythm was classified as VT (R to S nadir >100 ms in one of the precordial leads, here V5, V6) [Figure 2a]. M mode echocardiography (subcostal view) showed Vcw > Acw, strongly suggesting VT [Figure 2b]. The patient showed intermittent capture beats, while on amiodarone infusion, further confirming the rhythm to be VT. 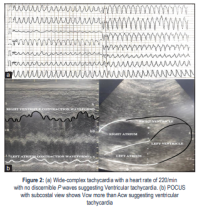 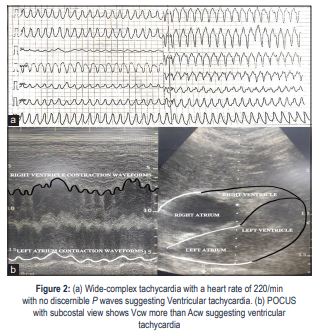 We obtained written informed consent from all the patients.

Dealing with tachyarrhythmias in a highly crowded, busy ED is often challenging. It needs in depth knowledge regarding ECG to decipher and treat any tachyarrhythmias appropriately. It is of great importance to differentiate VT from SVT since inappropriate acute management can lead to poor outcomes.

Although various algorithms are available, most of them are complicated, multistep, and difficult to remember. While a few algorithms are easy, the diagnostic accuracy is low. The confusion can still increase when the algorithm based ECG diagnosis is wrong based on the gold standard EP diagnosis. These mismatches can lead to unnecessary delays in diagnosis and treatment in an ED. This delay is more among stable tachyarrhythmia, where the treatment is mainly dependent on the subtype of tachyarrhythmia. Unstable tachyarrhythmia needs to be cardioverted immediately; hence, origin prediction is not necessary for an acute situation.

AV dissociation, fusion beat, capture beat, northwest axis, precordial concordance, positive aVR, RBBB QRS >140 ms, and LBBB QRS >160 ms are some of the traditional VT diagnostic criteria.[3,4] WCT in a patient with preexisting AV conduction block will be VT unless proved otherwise.[2] In SVT with aberrancy, LBBB with right axis deviation is uncommon. In VT, RBBB with the normal axis is rare. In SVT, the initial QRS electrical vector moves rapidly in the beginning and slowly at the end. In contrast, slow conduction happens throughout the QRS in VT.[5] If the QRS complexes of WCT are like those of baseline ECG, the chances are good that the WCT is SVT.[5]

Various ECG algorithms had been proposed for differentiating WC SVT and VT. Among them, the Brugada algorithm is the most widely used one. Despite the numerous criteria, accurate diagnosis of WCT remains a challenge.[6] Many studies were unable to corroborate Brugada’s and Vereckei’s original articles’ high sensitivity and specificity.[3,4] The Basel algorithm, limb lead algorithm, and inferior lead Q wave algorithm are the three newer ECG algorithms that have recently been proposed to differentiate VT from SVT in WCT.[7 9] The limitations of current existing algorithms are the complexity of algorithms, less diagnostic accuracy, and the chance of misdiagnosis of preexcited SVT/fascicular VT/wide complex atrial flutter.

Need for a newer algorithm – the TOP UP technique

When there is still an ambiguity after clinical and ECG prediction, the only option left out currently is the gold standard invasive EP study. There is a compelling need for a newer and simpler technique to bridge this gap in clinical practice. We had a very simple idea of using POCUS to decipher WCT as SVT or VT. SVT would have an equal or a greater number of P waves than QRS, resulting in an AV ratio of ≥1. Since VT does not necessitate atrial activity, the AV ratio is often <1.[5] Very rarely, VT can have 1:1 AV conduction. Using POCUS, we extrapolated the above concept using M mode/AMM along the atrium and ventricle to look for contraction waveforms. We tried this and found it to have a good correlation with the final diagnosis.

Only 20% of the VT ECGs show AV dissociation, and sometimes, P waves will be buried within the QRS complexes. Hence, the novel TOP UP technique can unravel those findings and act as a bridge to assess atrioventricular association/dissociation for differentiating SVT and VT. However, more diagnostic accuracy studies are still required. It can make a drastic change in the tachyarrhythmia approach in ED if this interesting concept is shown to have good diagnostic accuracy in future studies. With more echocardiographic experience, echocardiography may become a standard investigation for diagnosing WCT in the future.[10]

How to perform and interpret the TOP UP technique

Steps to perform the TOP UP technique are as follows:

Step 1: Patients with stable tachyarrhythmia who have either NCT or WCT should be chosen.

Step 3: Tachycardia origin can be determined based on the number of Acw and Vcw (atrioventricular association/dissociation), as shown in Figure 3. 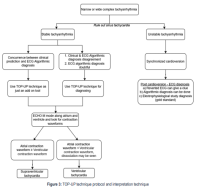 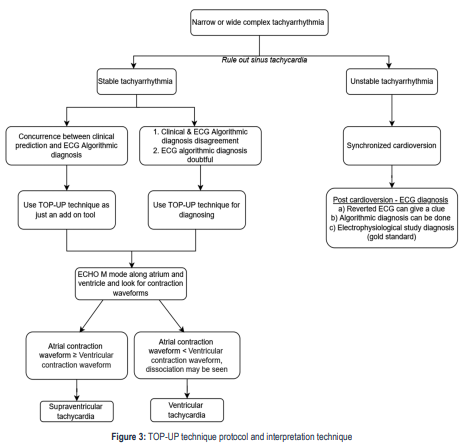 Strength and limitations of the TOP UP technique

The technique is a) very simple and repeatable by an ECHO trained person, b) can differentiate between VT and SVT, c) can reduce time delay in treating stable tachyarrhythmia, and d) a perfect point of care tool for an emergency physician in the acute treatment of tachyarrhythmia.

Few limitations include (a) it cannot differentiate subtypes of SVT, (b) one can mistake VT with 1:1 VA conduction (extremely rare) for SVT because ECHO cannot distinguish between anterograde and retrograde conduction, (c) M mode along the left ventricular regional wall motion abnormality can yield inaccurate findings, and (d) a poor ECHO window in obese patients can impede diagnostic ability.

The novel “TOP UP” technique can differentiate WCT and NCT as either SVT or VT. Although TOP UP had a clear concurrence with actual diagnosis in the above cases, further clinical research with more patients is needed to determine its sensitivity, specificity, and diagnostic accuracy. Hence, it should not be used as a sole method for differentiating tachyarrhythmia; rather, it should be coupled with clinical and ECG criteria. If proven to have good diagnostic accuracy, the TOP UP technique will simplify emergency management of stable tachyarrhythmia and shorten recovery time.

The authors certify that they have obtained all appropriate patient consent forms. In the form the patients have given their consent for their images and other clinical information to be reported in the journal. The patients understand that their names and initials will not be published and due efforts will be made to conceal their identity, but anonymity cannot be guaranteed.