METHODS: A prospective observational study was done in the emergency department (ED). The study was conducted over 15 months (November 2019 to April 2021). It included patients more than 18 years presenting to the ED in shock. The IJV and IVC diameter and cross sectional area were measured using ultrasound. The corresponding collapsibility indexes were then calculated and correlated with the invasively monitored CVP of the patient. Data were then analyzed using the Statistical Package for the Social Science (SPSS): Version 23 for windows. Pearson’s correlation was used between CVP and collapsibility indexes.

CONCLUSION: Both IJV and IVC collapsibility indices correlated significantly with invasively measured CVP. Hence, they present as an effective tool in fluid resuscitation in patients with shock in ED.

The management and hemodynamic monitoring of patients in shock in the emergency department (ED) shock poses an uphill task for the emergency physicians. After the initial resuscitation, assessment of the fluid status of the patients is very important for further management of hypovolemic patients. This not only aids in grading the severity of shock but also in assessing the response to the initial treatment given to these patients.[1] Conventionally, clinical parameters such as tachycardia and reduced systolic blood pressure have been used to assess the hemodynamic status of a patient. However, the role of clinical monitoring is limited and unreliable in critically ill patients.[2] For example, patients who is elderly with chronic hypertension taking beta blockers or calcium channel blockers may not show early signs of hemodynamic compromise. Central venous pressure (CVP) has been used mainly in the intensive care unit (ICU) as a measure of right atrial pressure (RAP), which is a major determinant and a good indicator of right ventricular filling.[3] However, it becomes impractical in the ED as it is time consuming, requires specialized monitoring equipment and a skilled physician who can place a central catheter. Furthermore, there are immediate, early, and late complications associated with this procedure.[4] The commonly reported complications are puncturing of the pleura, artery, or the structures around the vein. Catheter related infections are common if it is kept for an extended period of time.[5]

Thus, noninvasive techniques such as ultrasound guided measurement of inferior vena cava (IVC) and internal jugular vein (IJV) parameters have been used recently as an alternative. IVC parameters such as diameters and collapsibility indices can be promptly measured and calculated bedside and have shown fair to excellent correlation with RAP.[6,7] They have been measured with a high degree of inter rater reliability. This has allowed ED clinicians to take appropriate decisions regarding aggressive fluid management.[8,9] However, measurement of IVC diameter is difficult in patients with abdominal incisions post laparotomy and morbidly obese patients.[10,11] Other factors that can affect these parameters are increased tricuspid pressure, pulmonary artery pressure, or pulmonary valve disease.[12] The IJV is an alternative vein that is being recently studied as it is an easily accessible vein. The indices such as IJV anterior posterior (AP) diameter, width, cross sectional area, and their collapsibility indices have also been studied as predictors of CVP.[13,14] However, very few studies in the past have correlated both IJV and IVC indices with invasively measured CVP.

In this study, we aimed to correlate the ultrasound guided measurements of IJV collapsibility index (CI) and inferior vena CI with invasively monitored CVP in patients diagnosed with shock presenting to the ED.

This prospective observational study was performed at the ED. Ethical approval was provided by the institution review board on November 29, 2019 (IEC/19/1208). Informed written consent was taken from all the patients and/or relatives after explaining the aims and objectives of the study. The study was conducted over a period of 15 months, from November 2019 to April 2021.

The patients that were included were 18 years and above presenting to the ED in shock. Shock was defined by a systolic blood pressure <90 mmHg with symptoms and signs suggestive of shock. These patients needed to be actively resuscitated with intravenous fluids such as Ringer’s lactate or normal saline. A central venous catheter was inserted in the patients included in the study. We excluded patients who were pregnant, those with increased abdominal pressures, those with pericardial effusion, and mechanically ventilated patients. Patients with pulmonary hypertension, severe tricuspid regurgitation, and pulmonary valve disease were also excluded.

A sample size of 70 was taken after taking into account attrition.

Detailed demographic and clinical data were collected for every patient. The patient flow chart after meeting inclusion criteria is shown in Figure 1. A central venous catheter was inserted in the right IJV and CVP was measured. We used the SonoSite M Turbo handheld portable ultrasound machine (SonoSite, Bothell, WA, USA) for all measurements of the IVC and IJV using the curvilinear probe (2–5 MHz) and vascular transducer (5–10 MHz), respectively. We measured the IVC maximum and minimum diameter at the supine position just below the xiphisternum, 1 cm right from the midline at the atrial/hepatic vein/IVC junction where the M mode line was placed 1.5 cm from the hepatic vein [Figure 2]. The IJV diameters (maximum and minimum) [Figure 3] and cross sectional area (maximum and minimum) [Figure 4] were measured in one respiratory cycle at the level of the cricoid cartilage after confirming the vein from the pulsatile artery by manual compression. This was recorded at the supine position and, at the 30° body position. 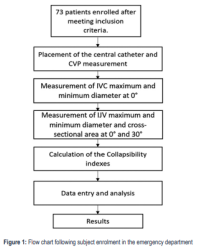 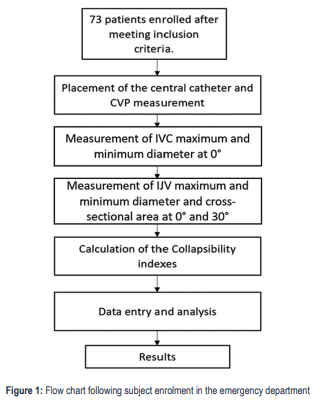 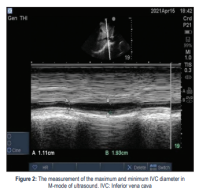 Figure 2. The measurement of the maximum and minimum IVC diameter in M‑mode of ultrasound. IVC: Inferior vena cava
× 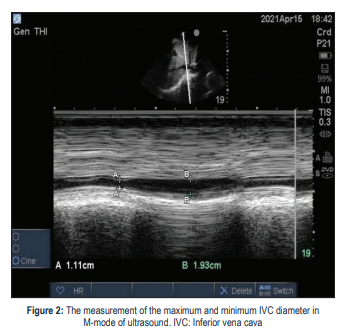 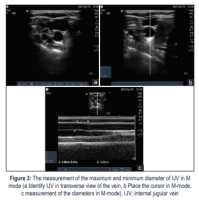 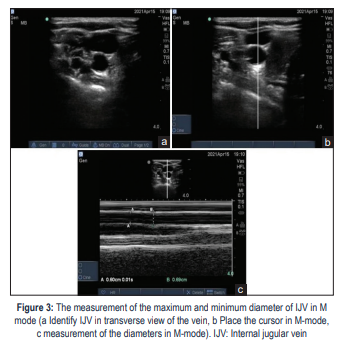 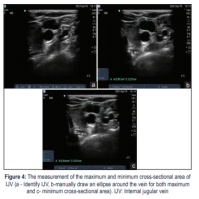 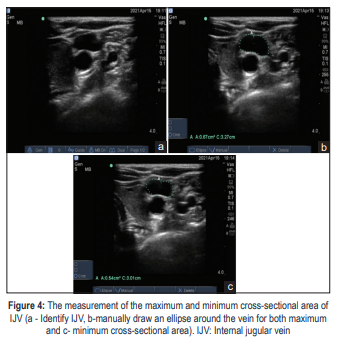 The collapsibility indices of the IJV parameters (diameter and cross sectional area) were calculated and recorded as CI 1, 2, 3, 4, and 5.

All data were collected by the residents who have been trained by a senior faculty (certified at point of care ultrasound). All the measurements that were taken were supervised.

The identity of the patient was not revealed and confidentiality of all information provided by them was maintained. 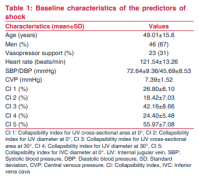 Table 1. Baseline characteristics of the predictors of shock 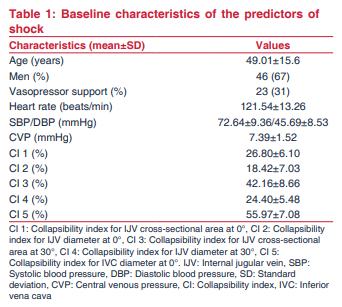 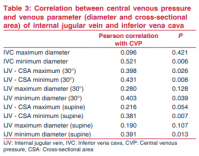 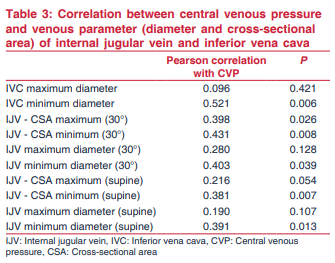 This was a prospective observational study that was carried out at the ED in India. A total of 73 patients fulfilled the inclusion criteria and were finally enrolled in the study. The mean(±SD) age of the patients with shock presenting to the ED was 49.01 (±15.6). There was a 47 (64%) male predominance which outnumbered females 26(36%)[Table1]. The initial vital signs in our study showed that the study group was tachycardic, which was attributed to the patient being in shock. Astudy done also done in India on patients who came to the ED with shock had a mean age of 51.7 (±18.88) and a male predominance of 60%. Their initial vitals also showed tachycardia(106.98 beats/min), a systolic BP of 78.5 mmHg and diastolic of 35.8 mmHg. This was comparable to our study.[14] The mean value for CVP in our study was 7.4 mmHg. The most common diagnosis was pneumonia(30; 41.1%), followed by perforation peritonitis(12; 16.4%) and urinary tract infection (7; 9.6%). A study which profiled patients coming to the ED saw that out 2782 ED visits(2.1%) who had critical care outcomes; pneumonia was the most common diagnoses similar to ours. In addition, 22,010 ED visits(16.2%) had hospitalization outcome; of which abdominal pain being one of the most common complaints.[15]

A systematic review was conducted by Ciozda et al., where 21 studies were found that compared IVC CI and CVP. Most of the studies showed moderate correlations between IVC CI and CVP which was in concordance with our study. There was heterogeneity across the studies evaluated by them in the timing of IVC size measurement concerning the respiratory cycle but still found a moderately strong correlation between the IVC diameter and CVP similar to ours.[17] Alavi Moghaddam et al. conducted a meta analysis and meta regression by searching 34 studies that included 2843 patients. They found that IVC CI correlated moderately with CVP (r = 0.54).This was also comparable to our study. Their correlation of inspiratory IVC diameter and expiratory IVC diameter with CVP to be r = 0.60 (P = 0.6) and r = 0.44 (P = 0.14), respectively, but were not statistically significant.[18] Our study, however, showed a correlation between minimum IVC AP diameter and CVP that was higher than maximum diameter and was statistically significant(r = 0.521, P = 0.006), as shown in Table 3.

Our study was a single center study done with a small sample size. This was also done during the peak COVID pandemic which affected the patient population that we received in our ED. We included hypotensive patients as the indications for placing a central venous catheter in a euvolemic patient were limited. Thus, this study lacked a control group needed to measure the area under the curve, specificity, sensitivity, positive predictive value, and negative predictive value.

Point of care ultrasound measurement of the venous parameters of both IVC and IJV provides a convenient noninvasive tool for the assessment of intravascular volume in patients with shock presenting to the ED (ED). IJV parameters measured at the 30° body position have proven to be a better indirect predictor of CVP.

STROBE guidelines were used while drafting the document.

Ethical approval was provided by the All India Institute of medical sciences (Rishikesh) Institutional Ethics Committee on 29‑11‑2019 in the letter AIIMS/IEC/19/1208.

A written consent was taken from every patient/next of kin in a language they understand (English or Hindi) before the start of the study.