A case of Guillain–Barré syndrome (GBS) was diagnosed in a patient admitted to the emergency department (ED) after ankle trauma was presented. GBS is generally defined as immune mediated peripheral neuropathy that develops after an infection. Our patient presented to ED with ankle trauma that developed after fatigue. Lateral, medial, and posterior malleolar fractures were detected in the ankle. The patient with loss of motor strength in the distal muscles was diagnosed with acute motor axonal neuropathy variant of GBS. After GBS treatment, the patient’s loss of muscle strength regressed, and then surgical treatment was performed. We aimed to present this case report, which emphasizes the systematic approach of the emergency physician without having a large differential diagnosis list.

Guillain–Barré syndrome (GBS) is a rare, but potentially fatal, immune mediated disease of the peripheral nerves and nerve roots, usually triggered by infections.[1] Patients with GBS typically present with limb weakness and sensory symptoms progressing to the arms and cranial muscles, but the clinical picture of the disease is heterogeneous and several different clinical variants exist. The diagnosis of GBS can be made based on the patient history, neurological examination findings, electrophysiological, and cerebrospinal fluid analysis.[2] GBS is more common in men than women and its incidence increases with age, but all age groups can be affected.[1] Electrophysiological studies can distinguish subtypes of GBS: acute inflammatory demyelinating polyradiculoneuropathy, acute motor axonal neuropathy (AMAN), and acute motor sensory axonal neuropathy.[1]

We present a case of AMAN type GBS, which we think is responsible for the etiology of the trauma, in a patient who applied to the emergency department (ED) after ankle trauma. With this case, we aimed to emphasize once again the importance of evaluating patients admitted to the ED with a systematic approach that covers all systems.

A 31 year old male patient was admitted to the ED with pain and swelling in his left ankle after an ankle trauma. The patient had a history of diarrhea that had started 10 days ago and lasted a week. Furthermore, the patient described feeling weak for the last 3 days, but they did not have a cough, myalgia, or shortness of breath. There was no known additional disease, history of operation, or drug use in his medical history. The patient’s vital signs in ED triage were as follows: body temperature 36.5°C, blood pressure 130/80 mmHg, heart rate 78 beats/min, respiratory rate 16/min, and peripheral oxygen saturation 97%. Deformity and swelling in the left ankle were noted during their physical examination. The left ankle range of motion was painful and restricted, and there was ankle edema, tenderness, and crepitation on the lateral malleolus with palpation. The peripheral pulses were equal and normal bilaterally. Muscle strength was determined as bilateral lower extremity distal and proximal 4/5 and bilateral upper extremities distal and proximal 4/5. Achilles, patellar, and styloradial tendon reflexes were not detected bilaterally. Biceps tendon reflexes were evaluated as bilateral hypoactive. There was no lateralizing or leveling sensory deficit. Respiratory and cardiovascular system examinations were normal.

Noncontrast cranial tomography performed to rule out intracranial pathology was normal. Displaced fractures in the lateral and medial malleolus of the left ankle and a fracture in the posterior tibial malleolus were detected in bilateral cruris X ray, bilateral ankle X ray, and bilateral foot X ray [Figure 1]. Complete blood count, comprehensive biochemistry panel, and venous blood gas were examined in the patient who had complaints of weakness and fatigue, and laboratory values were normal except for the leukocyte count (11.20 × 109/L). Severe acute respiratory syndrome coronavirus 2 polymerase chain reaction (SARS CoV 2 PCR) testing by nasal and pharyngeal swab was negative. A short leg splint was applied to the patient under traction. It was noticed that the patient did not feel any pain during traction, so his neurovascular examination was repeated. No new neurovascular deficits were detected. Surgery was indicated for the lateral, medial, and posterior malleolar fractures to maintain ankle stability. Cranial MRI and lumbar puncture were not planned for GBS because all the patient’s findings were compatible with this syndrome. The patient was evaluated as having GBS on the current examination’s findings.

Electromyography (EMG) was performed on our patient 2 days later. The EMG findings were found to be compatible with axonal motor neuropathy (GBS). Our patient was given standard dose 0.4 g/kg/day of intravenous immunoglobulin (IVIG) treatment for 5 days from the 1st day of hospitalization. “The patient was operated for ankle fracture. He was discharged on the 8th day after his symptoms completely resolved with IVIG treatment. The patient has given a written consent for the publication of the case report

Although there is no clear data in Turkey is estimated to be 0.8–1.9/100,000 incidence of GBS.[3] However, the current incidence may be higher due to difficulties in the diagnosis of GBS. It is important to clarify the mechanism of injury in order not to miss underlying conditions.[2]

Considering that our patient’s symptoms had started 3 days before admission, it is estimated that the GBS symptoms had not fully developed, and the current trauma was associated with weakness in the affected distal muscles. As in our case, early recognition of GBS symptoms in patients who applied to the ED prevents the delay of effective treatment options. This type of delay causes inefficient use of hospital resources. Considering the current pandemic, careful and correct use of existing resources is important for the continuity of health systems.

Although the pathogenesis of GBS is not fully understood, it is thought to be caused by an abnormal immune response to infections that damage peripheral nerves.[2] Approximately two thirds of patients who develop GBS describe an infective disease within 6 weeks before the onset of the disease.[1] In our case, the gastroenteritis of the patient in the current GBS was held responsible. Microbiological examination was not performed in terms of gastroenteritis, as it was thought that a negative result would not rule out the diagnosis in our patient.

For GBS, it has been reported that the frequency of GBS due to epidemic factors is increased during periods of increased epidemic disease.[4] Cases associated with GBS have been published, particularly for cases of Zika virus in French Polynesia.[5] There have been similar case reports during the current COVID 19 pandemic.[6] Furthermore, Figure 1: Trimalleolar fracture an increase in the frequency of similar GBS has been found for other viral infections; West Nile virus,[7] chikungunya virus,[8] and dengue infection[9] can be given as examples. In our patient, the results of SARS CoV 2 PCR testing, collected as nasal and pharyngeal swabs, in terms of the relationship between COVID 19 and GBS was negative, and the current diagnosis was found to be related to the gastroenteritis described by the patient. Nevertheless, patients presenting to emergency services with similar symptoms during pandemic periods and the diagnosis of GBS in these patients should be kept in mind along with other differential diagnoses. 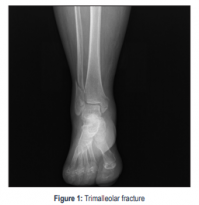 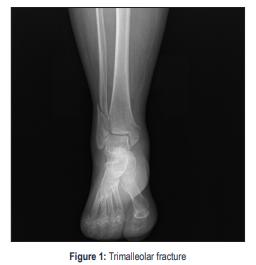 In general, early surgery is recommended for ankle fractures to avoid permanent ankle dysfunction.[10] However, it is not known whether surgical interventions for fractures associated with GBS increase the frequency of GBS and adversely affect the patient.[1]

In a literature review, we could not find any case that had been admitted to ED with trauma and was diagnosed with GBS. Considering the diagnostic difficulties of current guidelines, it is thought that the systematic approach of the emergency physician to patients will prevent possible GBS cases from being overlooked. Therefore, the importance of emergency medicine becomes clearer for similar cases, since the emergency physician has a wide list of differential diagnoses and can evaluate patients both surgically and internally.

The importance of a systematic approach to emergency medicine and a wide differential diagnosis list has been demonstrated once again with this case report. Emergency physicians should not focus on a single diagnosis when evaluating patients and should also review other differential diagnoses.

Patient has given a written consent for the publication of the case report.

The patient has given a written consent for the publication of the case report.
Declaration of patient: consent The authors certify that they have obtained all appropriate patient consent forms. In the form, the patient has given his consent for his images and other clinical information to be reported in the journal. The patient understands that name and initials will not be published, and due efforts will be made to conceal identity, but anonymity cannot be guaranteed.