OBJECTIVES: Previous studies have shown an association between systemic hypertension and intraocular pressure (IOP). We analyzed the relationship between the decreases of the blood pressure (BP) and IOP in hypertensive patients.

METHODS: The study includes a total of 214 patients: 158 hypertensive and 56 normotensive patients as study and control groups, respectively. The IOP of each eye in both the groups was measured once with a noncontact tonometer at presentation and an hour after BP reduction to normal in the study group. We analyzed the reduction in IOP with decreasing BP.

Hypertension is currently the most commonly seen cardiovascular disease.[1] Despite the availability of safe and effective medications, most hypertensive patients are known to have uncontrolled blood pressures (BPs). The prevalence of high BP in the emergency department (ED) was found to be 43.7%.[2]

Glaucoma is defined as a multifactorial optic neuropathy. Previous studies have shown an association between elevated intraocular pressure (IOP) and the development and progression of glaucoma.[3] In addition, studies have also shown an association between systemic BP and IOP. For example, in 2005, Klein et al. found a significant relationship between systemic BP and IOP.[4] Chua et al. found that increased age, BMI, diabetes mellitus, and increased systemic BP increased the IOP.[5]

To the best of our knowledge, the association between acutely treated hypertensive emergency or urgency in the ED and IOP has not been analyzed. In this study, the effect of decreasing systemic BP in the ED on IOP was investigated.

This single-center, prospective, observational case–control study was carried out at the ED in a tertiary university hospital in Turkey between January 30, 2019, and January 30, 2020. Ethical approval was obtained from the Hacettepe University's Ethics Committee numbered 2019/03 29 (KA 19001).

The study group consisted of patients over 18 years old with systolic BPs (SBP) over 180 mmHg or diastolic BPs (DBP) over 120 mmHg and with no previous diagnosis of glaucoma. The control group consisted of volunteers over 18 years old with SBP <130 mmHg and DBP <80 mmHg with no comorbidities such as hypertension and symptoms indicating increased IOP such as headache and eye ache. Volunteers, who included in the control group, were selected consecutively from patients who admitted to the ED with complaints other than hypertension, headache, or eye ache. The first six patients who met the specified criteria were included in the control group every day for 10 consecutive days. 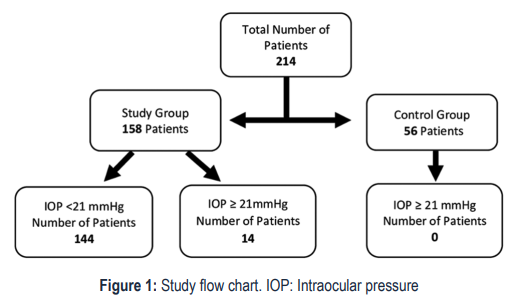 A single BP measurement was taken from all patients at the triage of the ED, and measurements were recorded. In the control group, BP was measured only once, which was during the initial presentation. On the other hand, in the study group, BP was measured at presentation, and an hour after, the BP decreased to normal level with antihypertensive treatment. All patients in the study group were treated with ACE inhibitors and calcium channel blockers.

IOP was measured with the noncontact tonometer (Noncontact Tonometer FT 1000 CE 0120, Tomey Corporation, Germany, SN 784210) that was available at the ED. IOP measurements at the ED were taken by one emergency resident doctor who had a 2 h training program on how to operate the noncontact tonometer. In addition, measurements on 10 volunteers under the supervision of an ophthalmologist before the study were carried out. All measurements taken during the study were recorded. Patients whose IOP could not be measured with a tonometer, including patients who were in a poor condition, unconscious, and with a Glasgow Coma Score <15, were excluded from the study. The patients who were not treated with predetermined treatment were excluded from the study.

In the study group, the IOP of the right and left eye was measured once with the noncontact tonometer, while the patients were hypertensive. After patients were treated with antihypertensive medications, IOP measurements were taken again when the SBP and DBP were under 130 mmHg and 80 mmHg, respectively. According to the European Glaucoma Society guidelines, high IOP was defined as 21 mmHg or more.[6]

The IOP of both the eyes of the control and study groups at presentation was compared. In the study group, the effect of decreasing the systemic BP in the case of hypertensive emergency or urgency on the IOP was analyzed. As a result of the evaluation in the ED, patients with IOP above 21 mmHg were referred to the ophthalmologist for the evaluation of glaucoma. The ophthalmological evaluations were analyzed. 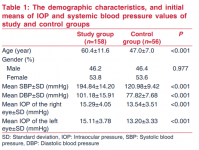 Table 1. The demographic characteristics, and initial means of IOP and systemic blood pressure values of study and control groups 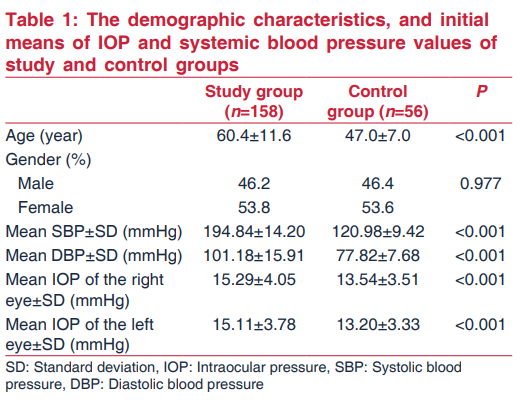 In the study group, 130patients (82.27%) had comorbidities. The most common comorbidity was hypertension(65.80%). The patients in the control group were all healthy individuals, and therefore, no comorbidities were found.

In the study group, the most common reason for presentation to the ED was high BP measured at home (39.87%). Headache was the second most common presenting symptom (24.68%).

After patients were treated with antihypertensive medications at the ED, the mean IOP measured while the patients were normotensive was 13.78 ± 4.06 mmHg in the right eye and 13.51 ± 3.82 mmHg in the left eye. A statistically significant difference was found between the IOP measurements before and after antihypertensive treatment. An average 1.50 mmHg decrease in the right eye (P < 0.001) and 1.59 mmHg decrease in the left eye (P < 0.001) were found [Table 2].

Table 2. The mean of intraocular pressure of the right and left eye in the study group before and after treatment with antihypertensive drugs

One hundred and fifty eight patients who presented to the ED with severe hypertension were included in the study group. Gender distributions were similar in the control and the study groups. In a study by Deb et al., in 2014, 66% of patients in the hypertensive group were male and 34% were female patients, whereas in the normotensive group, 47% of patients were male and 53% were female patients.[7] The results in our study were similar to those previously reported.

In the study group, 82.27% of 158 patients had known comorbidities; the most common comorbidity was hypertension (65.80%). The patients in the control group were all healthy individuals, and therefore, no comorbidities were found. In a 6 year population based cohort study conducted by Chua et al. in 2019, changes in IOP were positively associated with body mass index, diabetes mellitus, hypertension, and baseline SBP and DBP.[5]

In the study group, the most common reason for presentation to the ED was high BP measured at home and headache. In a study by Zampaglione et al., in 1996, the most common presenting complaint in hypertensive emergency and urgency patients was headache (22%).[8] Conversely, in the Studying the Treatment of Acute Hypertension registry, shortness of breath (29%), chest pain (26%), headache (23%), altered mental status (20%), and focal neurologic deficit (11%) were more frequently reported.[9] In our study, the frequency of headaches as a common complaint in hypertensive emergency and urgency was similar to that found in other studies.[8,9] However, complaints such as chest pain and shortness of breath were much less compared to other studies. In addition, patients with complaints such as epistaxis, altered mental status, and focal neurological deficit were not included in our study. The reason for this was that patients with these complaints were unstable or did not meet the appropriate conditions to have their IOP measured with the tonometer.

In the evaluation of the study group, hypertensive urgencies were only 3.4% of the whole group. Similar to our study, previous studies have also estimated that hypertensive emergencies occur in up to 2%–3% of hypertensive patients.[8,10]

To the best of our knowledge, this is the first study conducted in literature in which the association between IOP and systemic BP was studied in an emergency setting. In the cross sectional observational study by Deb et al., the relationship between BP, IOP, mean ocular pressure, and primary open angle glaucoma in patients with hypertension was studied, and these patients were compared to a control group of normotensives without diagnosed hypertension. This study was carried out at the department of ophthalmology in a tertiary health care center in India. The mean age for each group was 55 years old. A single BP measurement was taken. The mean systolic and diastolic pressures in the hypertensive group were 142.6 mmHg and 86.7 mmHg, respectively. The mean systolic and diastolic pressures in the normotensive group were 126.6 mmHg and 77.5 mmHg, respectively. The mean IOP in the hypertensive group was 15.2 mmHg in the right eye and 15.6 mmHg in the left eye, whereas the IOP in the normotensive group was 13.5 mmHg in both the right and left eyes. The means of the two groups were found to differ significantly (P < 0.001).[7] Although patients in this study did not have severe hypertensive values as the patients in our study did, the mean IOP in this study was similar to that found in our study.

In a systematic review and meta analysis by Di Zhao et al., in 2014, the association between BP levels and hypertension with primary open angle glaucoma and IOP endpoints was studied. Sixty observational studies were included. This study concluded that hypertension and increased SBP and DBP were consistently associated with increased IOP.[11]

In the Blue Mountains Eye Study conducted by Mitchell et al., in 2004, an association between hypertension and intraocular hypertension (defined as IOP >21 mmHg with no optic disc and visual field pathology) was observed. 3654 patients aged 49–97 years old were examined at the department of ophthalmology. Hypertension was defined as a history of hypertension currently receiving treatment or SBP ≥160 mmHg and/or DBP ≥95 mmHg at the examination. Hypertensive patients were then divided into three subgroups: treated and controlled, treated and uncontrolled, and untreated hypertensive.

An important limitation in this study is that one measurement of BP and IOP was taken, which could have led to measurement errors. The lack of detailed evaluation of corneal thickness is another limitation of our study. This could have resulted in inaccurate IOP measurements.

Strengths of this study include that IOP measurements were always taken by the same physician. It was predicted that the inaccurate measurement rate will be less with one practitioner who is experienced in using tonometer than that of inexperienced practitioners. However, assessing inter rater reliability between measurements made by different practitioners could have made the study more reliable.

Patients in the study group showed a significantly higher IOP compared to patients in the normotensive group. The patients in the study group showed a significant reduction in IOP after BP reduction. This may indicate that uncontrolled hypertension poses a risk for prolonged higher IOP. Prolonged higher IOP can be considered a risk factor for the glaucoma. Further studies with larger numbers of subjects, including ophthalmologic evaluation of patients with uncontrolled hypertension, will help predict possible glaucoma in this group.