Abdominal twitches due to ICD lead dislodgement; A case report

Malfunctions of implantable cardiac devices have the potential to be catastrophic. A 63-year-old patient was admitted to our emergency department with new-onset abdominal pain and sensation of twitching on his abdominal wall. One month ago, an implantable cardioverter-defibrillator (ICD) was implanted in him to prevent malignant ventricular arrhythmias. An electrocardiogram was obtained that showed pace spikes unrelated to QRS complexes. The patient was diagnosed with ICD lead dislodgement and the lead was repositioned in another procedure. In conclusion, emergency physicians should be familiar with the problems of implantable cardiac devices.

A 63 year old patient was admitted to our emergency department with new onset abdominal pain and sensation of twitching on his abdominal wall. At his past medical history, the patient had coronary artery bypass grafting operation, ischemic stroke, and congestive heart failure. The patient’s ejection fraction was 30%, and therefore, an ICD was implanted to prevent malignant ventricular arrhythmias 1 month ago. He was on his own medications regularly. He denied any recent trauma to his abdomen or thorax. His vital findings were in normal limits and his physical examination was unremarkable except observable twitching movements on his abdominal wall. An electrocardiogram (ECG) was obtained from the patient that showed sinus rhythm, right bundle branch block(RBBB) with left posterior fascicular block (LPFB), and pace spikes unrelated with QRS complexes [Figure 1]. The patient was monitored and observed that the pace spikes occur simultaneously with abdominal pulsations. The patient was admitted and another operation was performed for the repositioning of the lead. A fluoroscopic imagining was obtained before the procedure that showed the dislodgement of the ICD lead [Figure 2]. During the procedure, coiling of the lead around the generator was observed and the lead of the ICD was uncoiled and repositioned under fluoroscopy. The patient’s complaint had resolved after operation, an ECG was obtained that showed sinus rhythm with RBBB and LPFB without any pace spikes and chest X ray that confirmed normal placement of the lead [Figure 3] and the hospital course was uneventful, and the patient was discharged the day after the procedure. 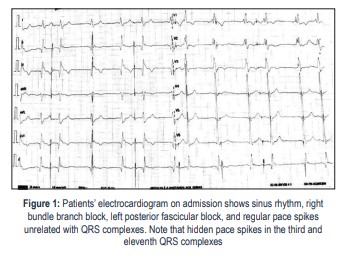 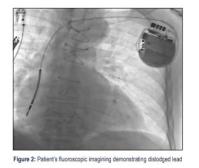 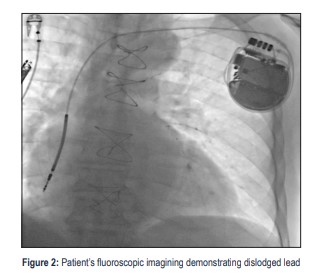 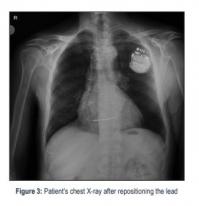 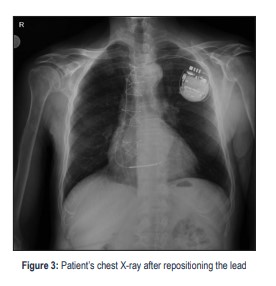 Written approval was obtained from the patient to publish his case and images.

In this paper, we present a case who had an inserted ICD and abdominal twitches simultaneously with pace activity. As the ICDs have pacemaker (PM) properties and generate pulses below the set limits of heart rate or in case of asystole, in our case, the device did not sense the ventricular systole because of the dislodgement of the lead from the right ventricle and generated paces that innervate nervous phrenicus, the reason of the abdominal twitching.

PMs and ICDs have similar components and they are composed of a power source, electronic circuit, and leads. For both the devices, three types of lead dislodgement were defined in the literature, but naturally, these dislodgement syndromes were reported earlier for PM s then ICDs: Twiddler’s, Reel, and Ratchet syndromes.[2 6] In Twiddler’s syndrome, the first reported lead dislodgement syndrome, the lead of the PM and ICD twists multiple times due to the rotation of PM generator on its long axis.[2,3,7,8]

In 1999, Carnero Varo et al. reported another form of lead dislodgement and called Reel syndrome in which the PM generator rotates on its transverse axis so the leads coil up around the generator, as in our case.[4,5] As the components of the PMs and ICDs are similar Reel syndrome related with ICDs might exist but to our knowledge, there were two Reel syndromes reported in the literature in this manner.[9,10]

In Ratchet syndrome, the lead of the devices moves toward to generator through the sewing sleeve until the tip of the lead reaches to the pocket.[6]

Age, obesity, proximity to the shoulder joint, hyperabduction of the arm, loose suturing fixation, and pocket mismatch and manipulation of the pulse generator are some important factors that play role in the dislodgement of the leads. In our case, age and hyperabduction of the arm may play some role due to the laxity of tissues for the dislodgement of the lead, although this mechanism is more commonly responsible for the development of Ratchet syndrome. In any case, training the patient for avoiding the manipulation of the device and restriction of excessive movements of the extremity in the early phase of implantation should be prescribed to prevent migration of the leads.

All types of lead dislodgement in all types of implantable cardiac devices may result in extracardiac stimulation, inappropriate shock, undetermined malignant ventricular arrythmias, syncope or asystole which may end in poor outcome. However, our patient had twitching movements due to PM activity of the ICD and therefore presented earlier which probably prevented him from a catastrophic ending.

Participants who have an implanted cardiac device should be followed up closer, particularly in the first few months, and emergency physicians should be familiar with the clinical scenarios that are caused by the malfunction of these implantable cardiac devices.

The authors certify that they have obtained all appropriate patient consent forms. In the form, the patient has given his consent for his images and other clinical information to be reported in the journal. The patient understand that name and initials will not be published and due efforts will be made to conceal identity, but anonymity cannot be guaranteed.