Clinical outcomes of in-hospital cardiac arrest in a tertiary hospital and factors related to 28-day survival: A retrospective cohort study

METHODS: In this retrospective study, we included the patients who suffered from IHCA in a tertiary hospital between July 2016 and April 2019. Pre- and post-resuscitation characteristics of the patients and event characteristics were defined to reveal the independent factors associated with ROSC and 28-day survival.

CONCLUSIONS: Independent risk factors related to ROSC and 28-day mortality were defined in the study. However, further studies are needed to devise new strategies for increased hospital discharge with preserved neurologic functions.

Authorities recommended qualityimprovement initiatives to improve outcomes of cardiopulmonary resuscitation(CPR). An optimal cardiac arrest team composition was considered compulsory for this purpose.[9] A cardiac arrest team, including a critical care expert, evaluates the critical patients; leads CPR; transfers these patients to advanced care facilities if required.[10] Despite the improvements, the survival rate in patients who achieved the return of spontaneous circulation (ROSC) ranges from 14.8% to 37.9% in different patient cohorts.[2 6,11] However, the actual data from Turkey about IHCA are limited. To our knowledge, previous findings may no longer reflect the current risk factors related to ROSC and 28 day mortality.

In the present study, we aimed to assess patients who underwent CPR due to IHCA and determine factors associated with ROSC and 28 day mortality in patients admitted to the intensive care unit (ICU) after ROSC.

This retrospective study was conducted on IHCAs in a tertiary hospital between July 2016 and April 2019. The local ethics committee approved the study (Prof. Dr. Cemil Taşçıoğlu City Hospital, Local Ethics Committee, Date: 31.04.2019, Nr: 1268). The need for the written informed consent was waived due to the study design.

IHCA cases that occurred in our center between July 2016 and April 2019 were included in the study. Patients suffering cardiac arrest in the departments such as operation theater, ICU, emergency service were not included in the study. The ROSC was defined as the presence of spontaneous circulation during the 1st h after CPR. We did not use any do not resuscitate or withdrawal procedure in practice due to legal restrictions.

Patient and event characteristics were collected from electronic medical records and blue code forms. Patients’ age, gender, comorbidities, and length of hospital stays were recorded. Possible reasons for the IHCAs were screened. Acute Physiology and Chronic Health Evaluation II (APACHE II) score, Charlson comorbidity index (CCI), Glasgow coma scale (GCS) on the 24th h of ICU admission, and cerebral performance category (CPC) score on ICU discharge were recorded. To clarify the mortality risk factors directly related to IHCA and exclude the other factors originating from late complications of hospitalization, we followed up the patients 28 days for mortality. We also evaluated 28 day survival according to the median APACHE II score.

The primary outcome of the study was to define factors associated with ROSC in IHCA cases. The secondary outcome was to determine the risk factors for 28 day mortality in patients admitted to in hospital ICUs after ROSC.

The SPSS Statistics software (Statistical Package for the Social Sciences Version 24.0; IBM Corporation, Armonk, NY, USA) was used to perform statistical analysis. Categorical variables were expressed as counts and percentages and analyzed using the Chi square test or Fisher exact test. Continuous variables were expressed as the median and interquartile range and analyzed using the Mann–Whitney U test. The independent effect of each factor on ROSC and 28 day mortality was determined using logistic regression analysis. We built two separate models to define independent risk factors for ROSC and 28 day mortality. To build the models, a purposeful method was used to select clinically important, statistically significant subsets of covariates adjusted for confounders. Age was not included in the model for 28 day mortality separately because of the APACHE II score. The omnibus test was used to check the goodness of fit in the logistic regression models and the test revealed a P < 0.001 for both models. An odds ratio (OR) and a 95% confidence interval (CI) were reported for each independent factor. A two tailed P value lower than 0.05 was considered statistically significant.

Figure 1. Flowchart of the study
× 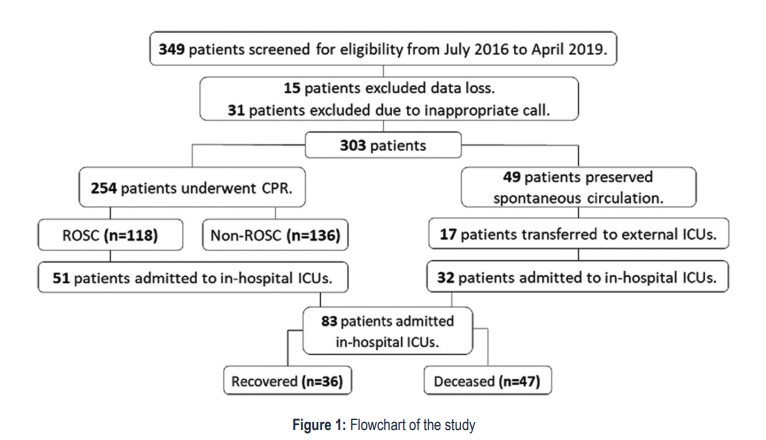 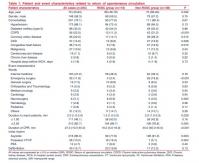 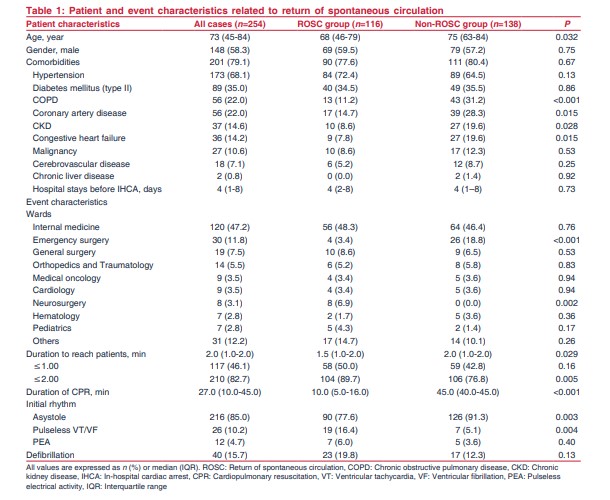 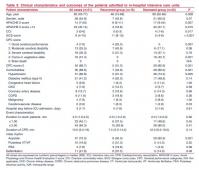 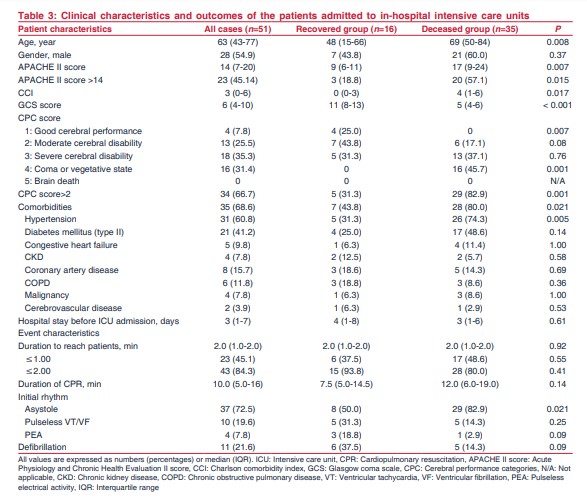 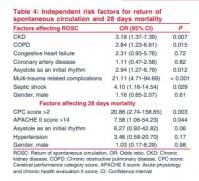 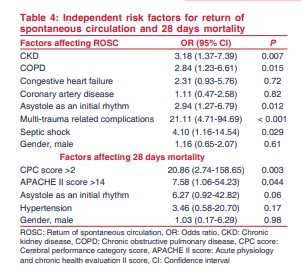 In the study, we assessed the patients who underwent CPR and were treated in the ICU after ROSC and found a few noteworthy results. Comorbidities including CKD and COPD, asystole as a first observed rhythm in CPR, multi trauma related complications, and septic shock were independent factors related to ROSC. In addition, we determined that a CPC score >2, and an APACHE II score >14 were independent risk factors for 28 day mortality in patients admitted to the ICU after ROSC.

In this cohort, the ROSC rate was 45.7%. The ROSC rate ranges from 35.7% to 54.0% in different patient cohorts.[2,3,5,11 13] We found that coexisting comorbidities, including CKD and COPD, were the independent risk factors related to ROSC. A previous study revealed that patients who did not have comorbidities included in CCI have a higher survival rate.[12] Age another parameter of the CCI was also a factor for ROSC. Notably, younger patients’ survival rate was higher regardless of hospital conditions, event characteristics, and patient characteristics such as coexisting comorbidities.[14] In this cohort, resuscitation success was significantly low in older patients than the younger ones. Compared with the other wards, CPR attempts in the emergency surgery ward more frequently resulted in death. Patients in this ward consist of individuals who underwent emergency surgery without preoperative optimization in a decompensated status. Thus, as an addition to coexisting comorbidities, the current functional status of the patients is also an essential factor related to ROSC.

Asystole as a first observed rhythm was another independent factor related to ROSC. Shockable rhythms were strongly associated with ROSC, as in previous studies.[2,4] Early defibrillation is one of the critical elements of CPR.[8,13,15,16] Many factors may affect achieving shockable rhythms. Patients with monitored and witnessed cardiac arrest have higher rates of survival.[4,5,12,13,15,16] In the neurosurgery ward, it is routine to provide monitoring for each critical patient. That is why the ROSC rate was significantly higher in the neurosurgery ward than in the others.

We also found that septic shock and multi trauma related complications as underlying reasons for IHCAs were independent risk factors for ROSC. Despite the improvements, patients with sepsis have worse outcomes than patients without sepsis.[17] A large cohort study revealed that sepsis related IHCA has a 0.65 fold lower rate of survival to discharge.[18] In addition, trauma is associated with reduced survival in cases with IHCA.[5] These consequences highlight the importance of early diagnosis of sepsis and the need for trauma teams to approach trauma associated IHCA.

We found that a CPC score >2 on ICU discharge was an independent risk factor for 28 day mortality. In addition, higher GCS scores were related to higher rates of survival. The mainstay of preserved cerebral functions depends on maintaining the cerebral perfusion with an optimal global oxygen delivery during CPR. Delayed arrival of rescue team more than 2 min was defined as a risk factor for decreased 30 day survival.[4] However, the duration of CPR is another factor associated with improved neurologic outcomes.[5,12,20]

Furthermore, asystole as a first observed rhythm in CPR independently related to 28 day mortality. Although shockable rhythms are strongly associated with short term survival,[5,6,12,13] pulseless VT/VF as an initial rhythm did not relate to 28 day survival in this cohort. The small sample size might be the reason for this result in this study.

The study has several limitations. The results of the single center retrospective data should be supported by other studies. The further data of the patients transferred to external ICUs were not evaluated. Furthermore, patients assessed in the in hospital ICUs had a heterogeneous character.

Despite the developments in healthcare quality, IHCA is still a common problem all around the world. In the present study, we defined the independent factors related to ROSC, such as comorbidities including CKD, COPD; asystole as an initial rhythm; trauma related complications, and septic shock. In addition, a CPC score >2 on ICU discharge and APACHE II score >14 were the independent risk factors for the 28 day mortality. It is clear that the extensive definition of factors associated with ROSC contributes to approaching IHCA and reduced mortality. Nevertheless, further studies are needed to increase discharge rates with a good neurologic outcome.

The study was approved by local ethics committee of Prof. Dr. Cemil Taşçıoğlu City Hospital with a decision number and date of 1268/31.04.2019.