CONCLUSIONS: We demonstrate compensatory protective mechanism despite overzealous fluid resuscitation. Compensatory increased CI despite decreased Hb maintained DO2. In the absence of inflammation, serum ANP did not increase significantly, no glycocalyx shedding occurred, subsequently no change in ELWI. We show that factors other than volume overload are more dominant in causing glycocalyx shedding.

Despite such findings, currently, there is no experimental study that clearly describes the effect of aggressive fluid resuscitation on ANP and syndecan 1 in relation to hemodynamic markers and ELWI. We hypothesize that aggressive fluid loading leads to the shedding of the glycocalyx via increased levels of ANP and subsequently elevates ELWI in hemorrhagic shock model.

Each animal subject was anesthetized with ketamine and xylazine, supported by volume control mechanical ventilation, adjusted to blood gas analysis readings. For maintenance, 3 mL/kg/h of 0.9% normal saline was infused. The environmental temperature was maintained with a thermal blanket. Following 1 h of stabilization, hemodynamic parameters and blood sample were drawn for baseline values.

The pressure targeted shock was then induced via venous blood drawing, to achieve a 20% reduction in mean arterial pressure (MAP). Thirty minutes later, two step resuscitation was performed. In Phase 1 resuscitation, we administered a bolus of normal saline with a volume equal to the volume of blood loss needed to induce shock. Thirty minutes later, the Phase 2 resuscitation was performed with a bolus of 40 mL/kg of saline to simulate aggressive fluid resuscitation.[11] Hemodynamic parameters were measured three times, at 3 min intervals for each stage, and up to 60 min following Phase 2 resuscitation. The numerical means of each data set were used for the statistical analysis.

The baseline data and characteristics of all subjects are shown in Table 1. Shock was achieved via blood drawing within 8 ± 4.7 min. Fluid resuscitation was administered in boluses, and Phase 2 bolus was achieved within 9 (2–24 min). 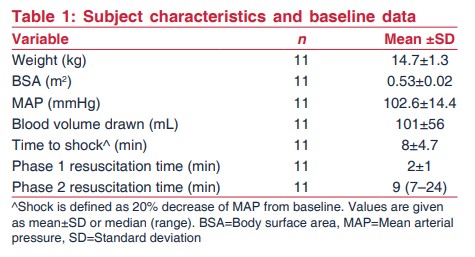 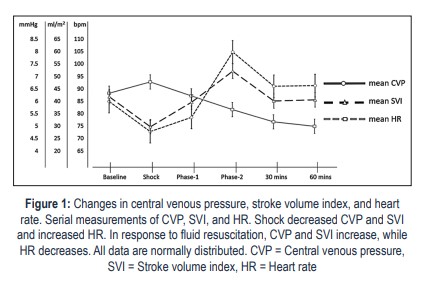 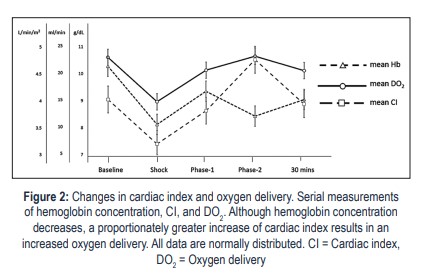 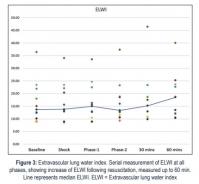 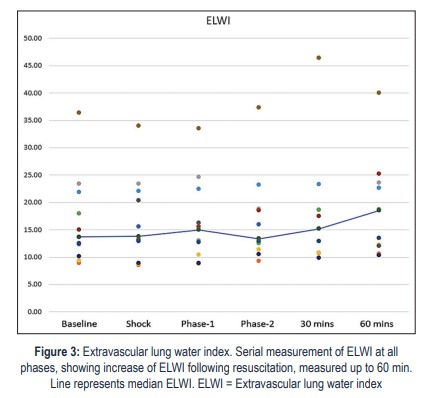 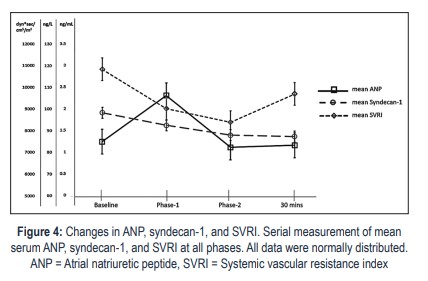 We found that despite overzealous fluid loading simulated by Phase 2 resuscitation, all hemorrhagic shock models were fluid responders. Hemodilution did not compromise DO2 as there was a compensatory increase in CI. Fluid loading immediately causes transient ANP increase, however, not followed by syndecan 1 release. We found that ELWI increased only minimally in the absence of glycocalyx shedding. Clinically, all of the animals survived and none were dependent on mechanical ventilator.

We observed a decrease in hemoglobin levels due to hemodilution. However, this did not significantly affect DO2 as there was an increase in CI. From a clinical point of view, central venous oxygen saturation (ScvO2 ) has an inverse relationship with oxygen extraction ratio.[15] In clinical setting, ScvO2 70% targeted resuscitation on mortality.[16] This shows that resuscitation cannot be only targeted to DO2 (and ScvO2 ).

We observed no significant increase in ELWI up to 60 min post hypervolemic resuscitation. This is contrary to a previous study in acute lung injury in swine in which ELWI increased from 6.3 (5.4–7.1) ml/kg to 9.4 (7.9–10.8) ml/kg within 180 min following fluid resuscitation.[17] Compared to this study, a median ELWI change of 0.93 ml/kg observed in our experiment has little clinical significance. Although the ELWI value may differ between species, clinically none of our animal subjects required mechanical ventilator during and after the experiment. Perhaps, this minimal increase in ELWI is limited by no shedding of endothelial glycocalyx that acts as a semi permeable membrane.

We observed an increase in ANP post Phase 1 resuscitation in hemorrhagic shock model, which then normalized to baseline level [Figure 4]. This finding concurs with previous studies in swine and rat models that demonstrate a temporary increase in ANP following volume loading.[18,19] ANP increases in response to atrial wall stretching following volume loading. In their study, Ozer et al. demonstrate that intact pericardium becomes the limiting factor to ANP increase.[20] We also demonstrate that despite increased CVP from Phase 1 to Phase 2 resuscitation, no significant GEDVI increase was observed. This may explain the returning ANP level in our animal model. However, this finding challenges the finding of Chappel et al. that shows no increase in ANP following Phase 1 volume infusion preceded by blood drawing, in contrast to volume loading.[10] We think that this may be due to difference in trial methods, i.e., bolus fluid administration in our study compared to slower fluid administration in their study, as well as different types of fluids administrated (HES 6% colloid solution) compared to NaCl 0.9% crystalloid saline in this study. Furthermore, Chappel et al. did not measure serial ANP, hence whether the increase of ANP was temporary or permanent could not be concluded.

There were some limitations to this study. Firstly, we only observed up to 60 min post Phase 2 resuscitation, hence we cannot draw any conclusion regarding the ELWI trend beyond 60 min. Secondly, the findings of this experiment may only be applicable in isolated hemorrhagic or hypovolemic cases, and not in cases complicated by inflammation or other stressors. We also did not include control group in this study and hence could not neglect the effect of anesthesia and procedures into the parameters measured. - Clinically, the principal management of hemorrhagic cases includes restoring intravascular volume, maintaining oxygen-carrying capacity while preventing coagulopathy, and most importantly limiting ongoing blood loss. In this study, our animal models underwent controlled bleeding, and resuscitation began after the bleeding stopped. Hence, the improvement in hemodynamic indexes, mortality, and morbidity outcomes should be carefully interpreted.

We recommend future studies using different models(septic shock and cardiogenic shock, presence of anemia, and continuous bleeding) to identify different compensatory changes, as well as to perform clinical observation in patients receiving fluid resuscitation to better distinguish which patients would benefit from liberal fluid resuscitation and to minimize its harmful effect.

This study is the first to demonstrate that all animal models of hemorrhagic shock were fluid responders. We observed that in compensation to excessive fluid resuscitation, DO2 is maintained by increased CI despite hemodilution. Following fluid resuscitation, the increase in ANP was only transient, while no glycocalyx shedding occurs even after excessive volume administration. Consequently, we found no significant increase in ELWI in the absence of glycocalyx shedding. This provides new insight on the physiological compensatory mechanisms in response to fluid overload in hemorrhagic cases, which should be taken into consideration for fluid resuscitation and its monitoring.