Gastric strangulation and perforation caused by a giant inguinal-scrotal hernia

Acute abdomen is always a challenging case presentation in an emergency department. A thorough clinical examination and prompt differential diagnosis and required investigations can save patients from potentially life-threatening conditions. We report the case of a 49-year-old gentleman who presented with a rare presentation of acute lower abdominal pain which initially mimicked renal colic (flank pain and dysuria), later as an upper gastrointestinal bleed manifested by massive hematemesis due to the stomach being pulled down into a giant inguinoscrotal hernia resulting in a gastric perforation. The patient underwent life-saving emergency midline open laparotomy. To our knowledge and as per the literature reviewed, this is an uncommon presentation of an acute lower abdomen pain wherein the gastric perforation due to a giant inguinoscrotal hernia masquerade as renal colic and posed a diagnostic challenge to the treating emergency physician.

The term acute abdomen refers to the rapid onset of severe symptoms that may indicate potentially life-threatening intra-abdominal pathology that requires urgent surgical intervention. A detailed history and thorough physical examination is the mainstay in shortlisting the differential diagnosis of the acute abdomen. Various common diagnosis of acute abdomen includes, but not limited to acute appendicitis, acute diverticulitis, acute pancreatitis, ruptured hollow viscus, vascular causes such as aortic aneurysm and ischemic bowel. In females, the common aetiology being ruptured ectopic pregnancy, torsioned or ruptured ovarian cyst. The location of pain can give an idea about the underlying pathology, but can be deceiving at times. Like in our patient who presented with the acute onset of right lower abdomen pain, ended up having a gastric perforation resulting in the features of upper gastrointestinal (GI) bleed.

A 49-year-old gentleman was brought in by ambulance to the emergency department (ED) with a history of acute onset of severe and continuous right lower quadrant pain radiating to the groin associated with nausea and dysuria. He did have a recent history of long-distance air travel. The patient gave a history of long-standing (20 years' duration) scrotal swelling which was relayed to him as a hydrocele. He denied smoking but did drink occasional alcohol.

On examination, the patient was in distress due to severe pain and was diaphoretic. His blood pressure –160/80 mm Hg, heart rate – 98/min, regular and was afebrile. No signs of pallor or icterus were noted. Examination of the abdomen revealed a tender right lower quadrant. No guarding or rebound or rigidity could be elicited. Bowel sounds were audible. A huge scrotal swelling extending up to his lower end of the thigh was noted. On examination of the swelling, it was nontender, normal color, one could not go above the swelling and trans-illumination test was negative.

The patient was then treated with intravenous (IV) analgesic, anti-emetics, and IV fluids. His condition improved after the institution of emergent treatment. A urine dipstick was ordered, but the patient was unable to give a sample. Given the severity of the pain and right lower quadrant tenderness, a computed tomography (CT) scan of the abdomen with contrast was requested.

CT showed a large amount of free air within the peritoneal cavity especially anterior-superiorly [Figure 1], and there was a moderate amount of free fluid seen within the upper abdomen as well as tracking inferiorly within the large left-sided inguinal hernia [Figure 2]. 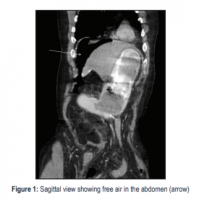 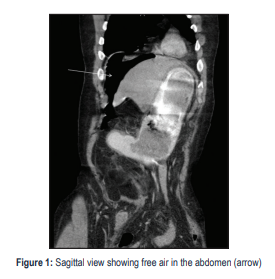 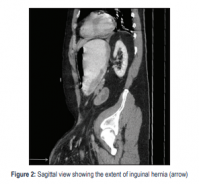 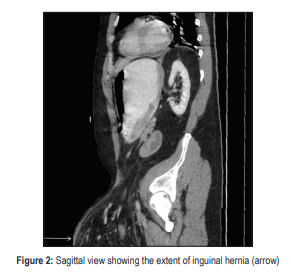 There was a discontinuity of the anterior wall of the distal stomach which was probably the site of perforation. The urinary bladder was displaced within the left lateral aspect of the pelvis secondary to the giant left-sided inguinoscrotal hernia. All other viscera were reported normal.

The patient was immediately taken to the operation theater for emergency midline open laparotomy. The findings were consistent with the stomach being pulled down to the lower abdomen with the greater omentum inside the large inguinoscrotal hernia, causing a tear of the stomach wall, resulting in massive hematemesis. A 4 cm tear of the anterior aspect of the stomach extending down to the greater curvature was found with blood clots and food particles in the peritoneal cavity. The omentum was resected, and the stomach tear repaired primarily. Repair of inguinal hernia was done after 3 months as an elective procedure. The patient remains well on correspondence and has not had a recurrence. Written informed consent was obtained from the patient for the purpose of publication of the case report.

An abnormal protrusion of a viscus or part of a viscus through an opening is defined as a hernia.[1] Among the prevalent types presenting in clinical practice, groin hernias are the most common and account for around 75% of abdominal wall hernias.[2] Although most of the patients are dealt with through an outpatient appointment on an elective basis, patients may present to the ED with complications associated with it. We have discussed in this report one such extraordinary case of a giant inguinoscrotal hernia that posed a significant diagnostic dilemma in the ED.

Giant inguinoscrotal hernias are described as hernias extending below the midpoint of the inner thigh in the standing position. These large hernias are fortunately rare and are seen as a result of neglect and reluctance to undergo a surgical intervention or may also be seen in patients unfit for surgery due to cardiorespiratory instability.[3] The size and chronicity pose a challenge to the clinician in terms of dealing with the complications associated with it and the management of the condition. Contents are usually small bowel loops with its mesentery and the large intestine, but various reports have mentioned other viscera, including the stomach, ovaries, urinary bladder, and even the kidney along with the ureter.[4],[5] These patients have a poor quality of life as the enormity of the hernia increases the morbidity manifold and are affected psychologically and socially as well. They suffer from urinary retention and voiding difficulties[6] along with excoriation and ulceration of the scrotal skin due to pressure and urine dribbling. The testis may get atrophied due to edema, venous congestion, and stretching of the spermatic cord. Activities of daily living such as walking, standing, sitting, and lying down become a dreadful predicament. In addition to all these concerns, the risk of complications such as intestinal obstruction, incarceration of the hernia contents, and strangulation is increased.[7]

The patient discussed in our report presented with a clinical quandary as he complained of acute abdominal pain and new-onset upper GI bleed which was established as gastric perforation in the giant inguinoscrotal hernia only on emergent CT images and urgent surgical intervention. This suggests that a low threshold should be placed for patients having a long-standing giant hernia who present to the ED with disparate symptoms. Delay in prompt diagnosis may increase the morbidity and mortality and lead to poor outcomes.

A thorough history taking and physical examination is required in every patient. Although patient's opinion and story need to be registered, a good clinical evaluation is required to obtain a prompt and an accurate diagnosis. Our patient thought it was a long-standing hydrocele with no consequences that led to delay in the diagnosis and necessary surgical intervention.

The authors certify that they have obtained all appropriate patient consent forms. In the form, the patient has given his consent for his images, and other clinical information to be reported in the journal. The patient understands that name and initials will not be published and due efforts will be made to conceal identity, but anonymity cannot be guaranteed.

Dr. Vijay Chander Vinod is the emergency physician who saw the patient in the emergency department, diagnosed the case and performed initial resuscitation. Original draft writing Dr. Muhammad Umar Younis is the surgical hospitalist who wrote the discussion part of the original draft, editing the article and interpretation of CT scan images.