OBJECTIVES: Although studies in the field of emergency medical services (EMS) generally compare survival and hospital discharge rates, there are not many studies measuring the quality of cardiopulmonary resuscitation (CPR). In this study, we aimed to compare the mechanical chest compression device and paramedics in terms of CPR quality.

High-quality chest compression (HQCC) is very important for survival in cardiopulmonary arrest patients.[1] To administer HQCC, the thoracic cage must be fully loosened between compressions at sufficient depth and speed.[2] It is quite difficult to administer HQCC during the prehospital period; the skill level or the number of staff may be inadequate, the staff may be tired, there may be scene-related or patient-related problems (e.g., chest elasticity differences and vascular difficulties), and it may be difficult to apply chest compressions in a moving ambulance. Although survival is very low after prehospital cardiac arrest,[3] the effective implementation of life chain steps can increase survival by up to 50%.[2]

Mechanical chest compression devices (MCCD) are designed to provide chest compressions at an appropriate depth and frequency without causing fatigue.[4] According to studies on the prehospital period, there is no difference between manual cardiopulmonary resuscitation (CPR) and MCCD-administered CPR in terms of hospital discharge and 30-day survival rates.[5],[6]

Although there are studies on the prehospital period comparing the survival and hospital discharge rates achieved after manual CPR versus MCCD-administered CPR, there are not many studies that measure the quality of CPR during this period. The main problem with prehospital cardiac arrest cases is the transport of the patient to the hospital. Sudden braking or acceleration of the ambulance and a decrease in CPR efficiency as the ambulance travels through road bends are important challenges. These challenges experienced by health-care professionals during transport cause pauses in the CPR.[7] Administering CPR during ambulance transports also endangers the safety of health-care professionals.

In this study, we aimed to evaluate and compare the qualities of chest compressions performed manually by health-care professionals and by a MCCD on a training model during a mode of ambulance transport.

Characteristics of the participants

Twenty paramedics – each of which had at least 5 years of field experience in the EMS of Ankara city and had completed the four training modules of the Ministry of Health (MoH) of the Republic of Turkey – were included in this study on a voluntary basis. The paramedic participants were allowed to get used to the training model by practicing on it for 10 min before the study. The participants were asked to apply chest compressions to the training model (in accordance with the 2015 American Heart Association guidelines) within the moving ambulance. All safety measures were taken to prevent the paramedic participants from skidding, falling, or being injured while administering chest compressions [Figure 1]. 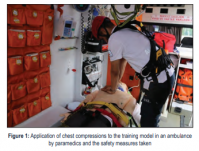 Figure 1. Application of chest compressions to the training model in an ambulance by paramedics and the safety measures taken
× 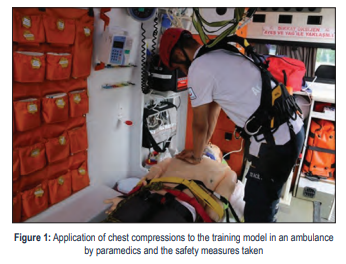 Characteristics of the ambulance driving track

The points where paramedics would have difficulty to perform CPR in the ambulance had been preevaluated. To prevent these difficulties in advance, a driving track for ambulance driving training was simulated in accordance with the national standards of the MoH of Turkey and the actual conditions. The driving track is designed to help drivers practice evasive maneuvering, parking, slalom, swiveling, and panic braking. The width of the driving track was 1.5 m, and its total length was 269 m [Figure 2]. 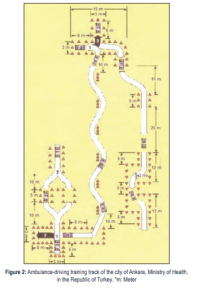 Figure 2. Ambulance‑driving training track of the city of Ankara, Ministry of Health, in the Republic of Turkey. *m: Meter
× 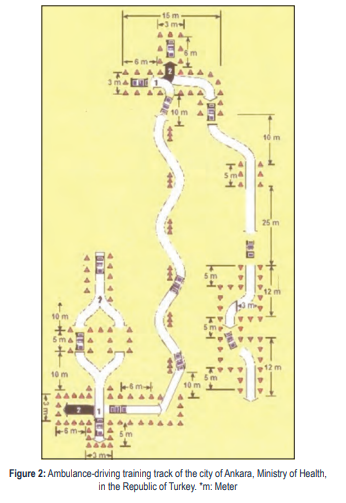 The study was originally intended to be carried out on a city traffic route instead of a simulated driving track. However, because the volume of traffic could not be standardized, it was finally decided to carry out the study on this driving track.

Characteristics of the ambulance

In this study, a fully equipped training ambulance (Mercedes Sprinter®, 2015, Germany) from the EMS of Ankara city was used. To ensure standardization, the ambulance was driven by the same ambulance driving trainer each time. Before the start, the driver was allowed to take five practice laps to get used to the driving track. During the study, the drivers were asked to go as fast as they could, but they reached a maximum speed of 40 km/h to ensure ambulance paramedics safety. The speed was up to 40 km/h on the straight-ahead route, while the maximum speed was 20 km/h in the maneuvering areas.

The LUCAS™ Chest Compression System (Lund University CardiopulmonaryAssist System; Physio-Control Inc./Jolife AB, Lund, Sweden) was used as the MCCD. The MCCD was fixed to the manikin by fastening the belts. The chest compression rate of the MCCD was set to 100/min, while its compression depth was set to 5 cm.

In the first stage, the paramedic participants performed manual chest compressions on the model while the ambulance was moving. To assess the effectiveness of the paramedics, each of the twenty paramedics took two laps around the track (20 paramedics × 2 laps = 40 laps). Because the ambulance did not move straight and maneuvered continuously, it was thought that one round would not be enough to assess the effectiveness of each paramedic. One lap of the ambulance around the track took an average of 2 min (a total of 80 min).

In the second stage, in order to ensure the equal time and CPR conditions with paramedics, forty more laps were driven performing chest compressions with the MCCD. To make comparisons with paramedics, at the end of each two laps, the number of chest compressions, the depth of compressions, and hands-off time were recorded; the CPR process and ambulance movements were recorded by cameras placed in the front and rear cabins of the ambulance.

All data recorded during the study were analyzed using SPSS software. The company information for the version 15.0 is as follows: SPSS for Windows, Version 15.0. Chicago, SPSS Inc. Categorical data were expressed as frequencies and percentages. The Kolmogorov–Smirnov test was used to determine whether the continuous data had a normal distribution. While the variables that were normally distributed were expressed as means and standard deviations, the variables that were not normally distributed were expressed as medians and 25–75 quarters. Student's t-test was used for parametric data, whereas the Mann–Whitney U-test was used for nonparametric data. To determine the statistical significance level, the critical alpha value was defined as P < 0.05.

Cardiac arrest patients should be treated as soon as possible. Performing high-quality CPR at the scene and during transport is very important for these patients. Although it is relatively easy to administer CPR at the scene, it is quite difficult to administer CPR in a moving ambulance during transport. The sudden accelerations, decelerations, and centrifugal forces in moving ambulances are the factors that make it difficult for paramedics to perform CPR. In order to avoid these factors, the use of MCCDs in prehospital emergency medical systems was investigated, and there was no statistically significant difference in the patient survival rates attained after manual CPR applications and MCCD use.[1],[5],[6] However, there are not many studies that examine CPR quality during the prehospital period. Therefore, in this study, we evaluated the effect of MCCD use on CPR quality in EMS. In our study, we found that the use of MCCD in patients with cardiac arrest in EMS was more effective when compared with paramedics in terms of chest compression rate and depth during CPR. We did not find a significant difference between the two groups in terms of hands-off time.

In a study by Olasveengen et al. comparing MCCD with manual CPR during transport, MCCD's hands-off time was found to be 8% of the entire CPR process, while it was 27% in paramedics.[14] In another study, while the hands-off time was 8.6 s during manual CPR, MCCD (LUCAS-2) performed uninterrupted CPR.[15] In our study, no significant difference was found between the paramedics and the MCCD in terms of hands-off time. Although we fixed the MCCD to the model, it slipped over the model during the movement and lost its position, which could be the reason of no difference found.

In the literature, no significant difference was found between MCCD-administered CPR and manual CPR in terms of survival and neurological damage.[4],[5],[6],[16],[17],[18] Survival results have been demonstrated in large randomized clinical trials; however, the effect of CPR quality on patient outcome is not discussed. It is emphasized that CPR quality is the most important factor affecting survival. However, there are not many studies in the literature that compare the quality of CPR achieved by MCCD and that achieved by health-care professionals. We believe that our study is important because it demonstrates that the quality of MCCD-administered CPR during ambulance transports is better than that of manual CPR.

The most important limitations of our study are the number of manual CPR samples, the duration of CPR administration, and the maximum speed of the ambulance. Our study was carried out on a driving track, not in real city traffic during a real patient transport (so as not to endanger the safety of any drivers, pedestrians, or health-care professionals). However, it is certain that the ambulance will be faster and less controlled during real hospital transport, a factor that may make MCCD-administered CPR a better choice.

Ethical approval for this study was obtained from the Non-Interventional Research Ethics Committee, University of Health Sciences (approval number 18/218, Date: 16.10.2018).

Burak Bekgöz conceived the study and designed the trial. İshak Şan gathered and analyzed the data. Mehmet Ergin and Eren Usul drafted the manuscript, and all authors contributed substantially to its revision.