Dabigatran is a direct oral anticoagulant that is widely used for stroke prevention in patients with atrial fibrillation. We report a case of an 80‐year‐old stroke patient on dabigatran for permanent atrial fibrillation, who presented with an initial National Institutes of Health Stroke Scale (NIHSS) of 8. Dabigatran was reversed with idarucizumab, and intravenous tissue-type plasminogen activator (IV-tPA) was administrated beginning 4 h and 28 min after the symptom onset. The patient was discharged with an NIHSS of 1. Our case is an additional proof of safety and efficiency of idarucizumab in the clinical setting of ischemic stroke before the administration of IV-tPA.

Dabigatran is a direct oral anticoagulant (DOAC) that is widely used for stroke prevention in atrial fibrillation. Idarucizumab is a monoclonal antibody fragment that was developed to rapidly, durably, and safely reverse the anticoagulant effect of dabigatran.[1] Current stroke guidelines suggest that intravenous thrombolysis (IVT) in patients taking DOACs could only be considered if laboratory tests are normal or the time since the last intake of medication is more than 48 h.[2] Taking into account that at least 1% of patients eligible for IVT will be on DOACs, an evidence of safety and effectiveness of IVT after idarucizumab is needed.[3]

Searching through literature, we found a series of case reports and systematic reviews that report the use of idarucizumab before IVT. In the largest systematic review, to date, authors identified 55 cases.[4] Here, we report the first case of the administration of intravenous tissuetype plasminogen activator (IV-tPA) after reversing dabigatran activity with idarucizumab in our institution.

An 80-year-old female patient presented to our emergency department at 03:42 pm with motor aphasia, ideomotor apraxia, and right faciobrachiocrural hemiparesis. Symptoms started 3 h and 15 min before the admission. NIHHS score of the patient was 8 points at the admission. The patient was taking dabigatran 110 mg twice per day due to permanent atrial fibrillation. According to her daughter, the patient took her last dose of dabigatran that morning at 10:00 am. In addition, the patient had a history of hypertension and had an episode of pulmonary embolism in 2018. Head computed tomography (CT) done 33 min after the admission showed no acute ischemic lesion or acute hemorrhage [Figure 1]. No occlusion of major cerebral artery was shown on CT angiography. The patient's family was informed regarding the rationale for idarucizumab use as well as the following systematic intravenous treatment using recombinant tissue plasminogen activator (rtPA), and they accepted the treatment. Due to lack of time, we neither test the activated partial thromboplastin time (aPTT) nor do the thrombin time tests before starting the treatment. Idarucizumab 2 × 2.5 g was administered over 5 min–10 min, followed by blood sample and immediate start of IV-tPA. IVT was started 4 h and 28 min after the symptom onset. The aPTT of the blood sample taken directly after the application of idarucizumab returned normal (24 s). Consequently, the rtPA application was continued to the full dose of 63 mg (a bolus of 6.3 mg given over 1 min, followed by an intravenous infusion of 56.7 mg given over 60 min). A new head CT scan was performed after 24 h, showing no evidence of a hemorrhage or infarct [Figure 2]. Around 20 h after the idarucizumab administration, the aPTT was normal (26 s). Apixaban was started in the evening on day 2 (24 h after the thrombolysis). The ultrasound of the carotid arteries revealed mild (30%) bilateral carotid stenosis. Due to high blood cholesterol level (7.2 mmoL/L), we recommended drug therapy with statins and diet change. The patient was discharged on day 5 with central facial palsy (National Institutes of Health Stroke Scale [NIHSS] = 1 point). 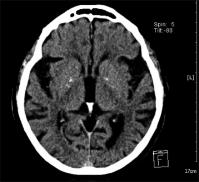 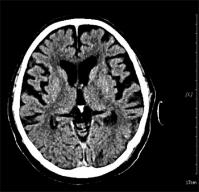 Figure 2. Noncontrast computed tomography brain scan performed 24 h after the intravenous thrombolysis showing no evidence of a hemorrhage or infarct
× 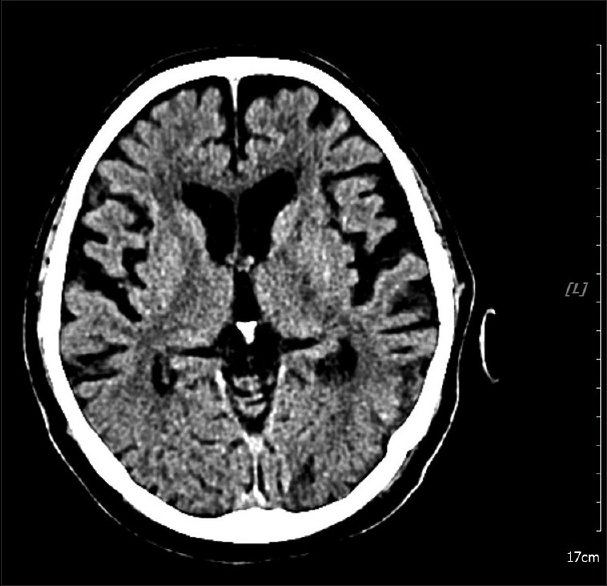 Cerebrovascular disease is a major cause of mortality and disability worldwide.[5] DOACs are potent medications but do not exclude an occurrence of brain infarction. IVT is a standard treatment for ischemic stroke but is contraindicated by the guidelines in patients taking DOAC including dabigatran, so idarucizumab administration could be a therapeutic option for these patients. As mentioned earlier, our patient was in the late time window for IVT. Her clinical course was excellent with an almost complete resolution of neurological symptoms, her NIHSS was 1, and the modified Rankin scale was 0 at discharge. She had no hemorrhagic complications, and in addition, idarucizumab in this case did not show any procoagulant activity. We decided to switch between DOACs and started our patient on apixaban 5 mg BID because of the clinical context (diagnostic workup did not reveal other reliable causes of ischemic stroke other than atrial fibrillation and older age >80 years – in these individuals dabigatran is suggested to be given in lower doses, epidermal growth factor receptor 57.6 ml/min). Because of significant clinical improvement and no evidence of hemorrhage or infarction on CT performed after 24 h, we decided to restart DOAC 24 h after thrombolysis.

Our case is an additional proof of idarucizumab's safety and efficiency in clinical settings of ischemic stroke before the administration of IVT. Moreover, it proved its safety and efficacy in a longer time window of IVT (4 h and 28 min after the onset of the symptoms).

Further data in larger cohorts and clinically more variable patients (in terms of ischemic stroke subtypes and the presence of various medical comorbidities) are required before this therapeutic regimen is adopted in routine clinical practice.

Consent to participate
The authors certify that they have obtained all appropriate patient consent forms. In the form, the patient has given her consent for her images and other clinical information to be reported in the journal. The patient understand that name and initials will not be published and due efforts will be made to conceal identity, but anonymity cannot be guaranteed.

GV, SD, MC, MK and ŽĆ managed the patient. GV and SD wrote the draft. All authors revised and approved the final version of the manuscript.