Pneumatosis intestinalis: An important radiological clue in a case of missed perforated appendicitis

Pneumatosis intestinalis (PI) is a rare radiological finding, characterized by the presence of gas in the bowel wall. It has a wide spectrum of possible underlying diagnosis ranging from benign to life-threatening conditions. We present a case of a previously healthy male who was initially presented with missed diagnosis of acute appendicitis which had led to perforated appendix. Failure to recognize the significance of PI and its correlation with other clinical information had caused the delay in his surgical intervention. Fortunately, the patient made a steady recovery and was discharged well. It is important to have a high clinical suspicion of life-threatening conditions whenever patients presented with a radiological clue of PI. Failure to incorporate this finding with other clinical clues might lead to devastating consequences and delay the necessary treatment.

Pneumatosis intestinalis (PI) can be defined as the presence of gas in the bowel wall. PI itself is not a disease, but merely a finding (usually radiological, but also can be histological, laparoscopic, or from autopsy) that resulted from an underlying pathological process, which can range from benign to life-threatening conditions [Table 1]. It is a rare finding, with a reported incidence of 0.03% based on autopsy series[1] and up to 0.37% in abdominal computed tomography (CT) scans series.[2] In a case series involving 919 cases, PI had a peak incidence in the age group of 41–50 years with a male predominance (male-to-female ratio 3:1). It affected most commonly the small and large bowel (42% and 36%, respectively), with 22% had both small and large bowel involvement concomitantly.[3] 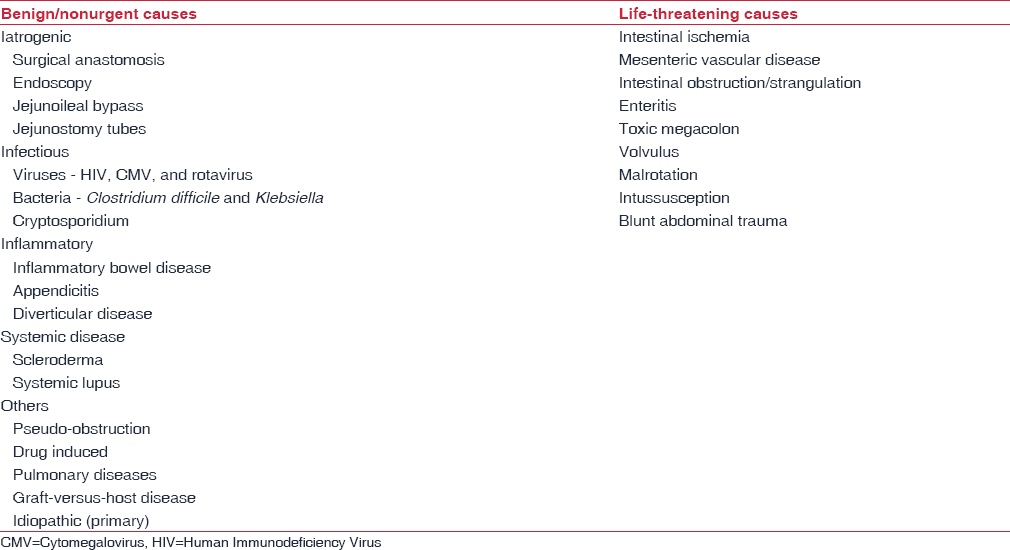 Our case highlights a rare occurrence of PI in perforated appendicitis. To date, only a few cases of PI in acute appendicitis had been reported.[4],[5],[6],[7] In addition, we emphasize the importance of the overall assessment of the patient to formulate the appropriate treatment management.

A 38-year-old male with unremarkable medical history was initially admitted to a district hospital following a 3-day history of nonradiating suprapubic pain which became unbearable on the day of presentation. It was associated with loss of appetite, nausea, and 2–3 episodes/day of nonbloody diarrhea. He denied any fever. Blood investigations only revealed mildly raised inflammatory markers with white cell count of 11.4 × 109/L (normal range: 4–10 × 109/L) and C-reactive protein of 2.5 mg/dL (normal range: <0.5 mg/dL). The chest X-ray otherwise was normal. Initially, urinary tract infection or renal stone was suspected. However, urine dipstick examination was unremarkable, and renal ultrasound examination did not show any evidence of acute pyelonephritis, renal calculi, or obstructive uropathy. A stool sample was collected for culture and sensitivity test, but in view of raised inflammatory blood markers and diarrhea, he was then empirically treated as infective acute gastroenteritis with fluids rehydration, intravenous cefuroxime, and analgesia.

On day 3 of admission, his suprapubic pain and diarrhea had subsided. However, he was complaining of progressively worse abdominal bloating, frequent hiccup, and burping. Abdominal examination revealed grossly distended abdomen with sluggish bowel sound but remained soft and nontender. CT of the abdomen and pelvis was performed and reported evidence of dilated duodenum and jejunum with no obvious transition zone. There was also a finding of PI of the small bowel with nonvisualized appendix obscured by bowel gas. In view of the nontender abdomen, the patient was treated conservatively with ongoing antibiotics, add-on ranitidine, and continued clinical monitoring. On day 5 of admission, the patient felt slightly worse with persistent bloating and hiccup. However, due to the lack of active plan from the hospital team, he decided to take his own discharge on day 7 of admission and seek second opinion from another hospital.

Upon presentation to our emergency department, his vital signs revealed mild tachypnea and tachycardia, with oxygen saturation of 98% on room air. Otherwise, he was normotensive and afebrile. Physical examination was positive for reduced vesicular breath sound at bilateral lower zones as well as distended but nontender abdomen with sluggish bowel sound. Blood investigations at this time showed a white cell count of 19.4 × 109/L, C-reactive protein of 9.63 mg/dL, and albumin of 24 g/l with normal renal profile, liver enzymes, electrolytes, amylase, and troponin-I. Arterial blood gas was significant for mild lactic acidosis (pH 3.32 and lactate 2.2 mmol/L). Chest and abdominal X-rays revealed the findings, as shown in [Figure 1].

Figure 1. (a) Chest X-ray revealed under inspired lungs with bilateral plate atelectasis at the midzone region (black arrows) (b) the presence of pneumatosis intestinalis along the small bowel at the left side of the abdomen associated with dilated small bowel (red arrows). Focal area of free air seen at the right hypochondriac region with lucent liver sign (black arrow)
× 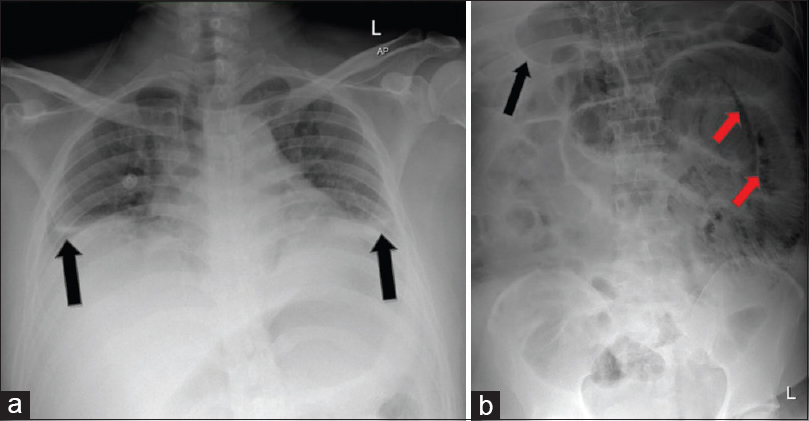 In consideration of the above assessment, the surgical consult was sought for the suspicious perforated viscus. Abdominal/pelvic CT was urgently performed and confirmed the finding of the perforated appendix with pneumoperitoneum. There was also a long-segment dilatation of the small bowel (starting from the duodenojejunal junction distally until distal ileum) with extensive circumferential intramural air in keeping with PI [Figure 2]. The patient subsequently underwent emergency laparotomy, in which abdominal washout and appendicectomy for the perforated appendix were performed. His postoperative recovery was complicated by bacteremia due to extended-spectrum beta-lactamase-producing Escherichia coli as well as slow wound healing. However, with prolonged intravenous meropenem and vacuum-assisted closure dressing, he made a gradual and steady recovery and was discharged well after 4 weeks with subsequent outpatient clinical follow-up. 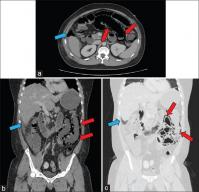 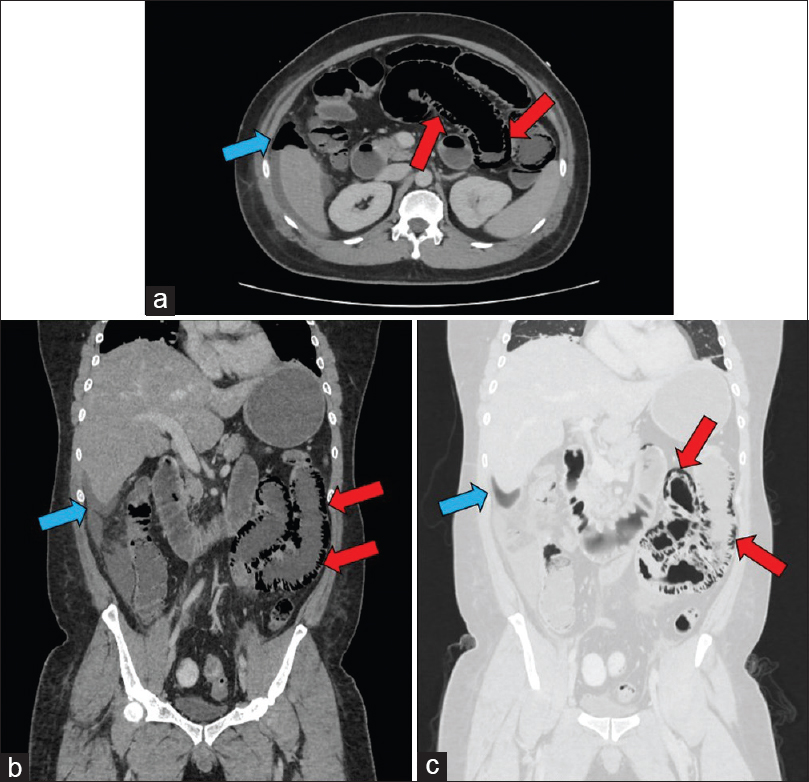 The pathogenesis of PI revolves around two principles, namely (a) the origin of intramural gas and (b) mechanism on how the gas gets into the bowel wall. In the setting of the normal mucosal barrier, it had been proposed that the intramural gas could be originated from the bowel lumen due to increased intraluminal pressure such as in blunt trauma,[8] ileus/pseudoobstruction,[9] and persistent vomiting.[10] This occurs by direct gas diffusion across an intact mucosal membrane.[11] Another proposed mechanism is gas diffusion through micro or macrobreak in the mucosal barrier.[12] Examples of conditions that can lead to mucosal defects include inflamed bowel mucosa (due to infection or inflammation), bowel ischemia/necrosis, immunosuppressive therapy, and iatrogenic (e.g., endoscopy procedure). Other possible sources include bacterial production of gas as well as pulmonary gas. Gas-forming bacteria can lead to PI by direct bacterial translocation or by increased intraluminal gas content. An interesting autopsy case had been published recently and showed that gas-forming enteric bacteria (Enterococcus faecalis) had been associated with a rapid onset of PI and hepatic portal venous gas through its translocation into blood vessels through the damaged bowel mucosa.[9]

The diagnosis of PI can reliably be made by radiological investigations such as plain abdominal X-ray and CT scan. It is characterized by radiolucency within the wall of the gastrointestinal tract. Abdominal X-ray alone is highly sensitive for PI, but subsequent imaging with CT scan is essential since the detection of bowel wall thickening, dilated bowel, abdominal free fluid, and/or perforated viscus would indicate more serious diagnosis as compared to isolated PI. Similarly, a finding of hepatic portal and/or portomesenteric venous gas on the CT scan might signify ominous sign due to its correlation with transmural bowel necrosis.[13] Pneumoperitoneum, on the other hand, can be associated with benign or life-threatening conditions. Spontaneous pneumoperitoneum in PI as occurs in benign condition has been attributed to the rupture of serosal/subserosal cysts in the bowel wall.[14]

The management of patients who presented with a finding of PI depends significantly on the overall assessment of the patients. Information on the patient's medical/surgical background, clinical symptoms, and signs, together with laboratory and radiological investigations, is crucial in determining the treatment approach. “Benign PI” can be managed conservatively by the wait-and-see approach, bowel rest, or oxygen administration.[15] On the other hand, “life-threatening PI” may warrant close patient monitoring with timely performed surgical intervention if indicated.

The following chronological events were likely had happened in our patient: acute appendicitis, (led to) ileus/dilated small bowel, (resulted in) increased intraluminal pressure with mucosal defect due to severely inflamed mucosa, (led to) perforated appendix, (precipitated the) transmural gas diffusion, and E. coli translocation, which produced more gas, (eventually led to) extensive PI with associated pneumoperitoneum, and intra-abdominal free fluid. The clinical diagnosis of acute appendicitis was delayed partly due to the patient's atypical presentation as well as partly due to failure in recognizing the significance of PI and its associated radiological findings. To complicate the case further, the antibiotic was started empirically without strong evidence of infective acute gastroenteritis. This likely had mask the clinical signs and symptoms which also contributed to the delayed diagnosis.

Clinicians should have a high clinical suspicion of life-threatening (or impending) conditions whenever patients presented with a radiological clue of PI. By doing this, the patient will be monitored closely and if indicated (due to worsening patient's condition or deteriorating investigation's results), timely surgical intervention can be performed. If the PI turns to be nonlife-threatening, then a step-by-step investigation can be executed to explore further the possible underlying diagnosis.

PI is an important radiological clue which underlies a spectrum of the pathological process ranging from benign to life-threatening conditions. Failure to incorporate this finding with other clinical clues might lead to devastating consequences and delay the necessary treatment.

Consent to participate
The authors certify that they have obtained all appropriate patient consent forms. In the form, the patient has given his consent for his images and other clinical information to be reported in the journal. The patient understands that name and initials will not be published and due efforts will be made to conceal the identity, but anonymity cannot be guaranteed.