METHODS: One hundred participants with traumatic finger injury were assessed. Digital nerve block was performed in fifty patients in the intervention group after 6 min of ice application. In the control group, this procedure was done without ice. The primary outcome was the difference between the needle stick and infiltration pain scores with and without ice pack. The secondary outcome the patient satisfaction score. The protocol of this study was approved by the Institutional Review Board, and it is registered in the Iranian Registry of Clinical Trials.

CONCLUSIONS: Ice pack is inexpensive, readily available, and is easy to apply. We recommend this method to reduce the injection pain before digital nerve block in the emergency department.

A digital nerve block is a common procedure before minor operations in some finger injuries in the emergency room. The nerve is blocked by infiltration of an anesthetic agent around it. Patients may experience a lot of pain and anxiety during this procedure.[1] Patient cooperation is required to perform the procedure successfully.[2] Topical anesthetic pastes, warming or buffering the local anesthetic agent, slow infiltration of the local anesthetic, and vibration or pressure on the injection site are used to reduce the injection pain.[3,4] Applying an ice pack to the injection site is an appropriate choice because of its effectiveness on pain reduction, convenience, and low costs. Decreased edema, nerve conduction velocity, cellular metabolism, and local blood flow are some of the known mechanisms of pain reduction after using an ice pack.[5] Recent studies have assessed the effectiveness of ice application for reducing the injection pain. One study showed the effectiveness of ice packing before digital nerve block in healthy volunteers. This study was conducted to evaluate the change in the pain score of digital nerve block after ice pack application in patients with traumatic finger injuries.[1]

Study design and participants
A prospective, randomized, nonblinded clinical trial was performed in parallel groups with a 1:1 allocation ratio and a block size of 2 to assess the effectiveness of ice pack application in pain reduction during digital nerve block during either needle stick or infiltration. The protocol of the study was approved by the Tehran University of Medical Sciences’ Institutional Review Board. This study was designed according to the Consolidated Standards of Reporting Trials.[6] The objectives of the study were explained to the patients, and informed consent was obtained from all of them prior to enrollment.

The sample size was obtained according to the mean differences of visual analog scale (VAS) in the previous studies. According to Reichmann’s study, the mean and standard deviation (SD) of VAS were calculated (2.8 and 1.7) and (4.1 and 1.8) in ice and no ice groups, respectively, and a sample size of fifty in each group was calculated by type 1 error of 1% and study power of 90%.[7] One hundred and seven participants with traumatic finger injury were recruited to the study.

Seven participants were excluded due to pregnancy (n = 2) or having a rheumatologic disease (n = 5). Data were collected from 2014 to 2016 at two university hospitals affiliated with the Tehran University of Medical Sciences (Sina Hospital and Imam Khomeini Hospital Complex) in Tehran. The exclusion criteria were patient refusal of the recommended treatment, pregnancy, sensitivity to the local anesthetic agent, cold sensitivity, communication disorder (e.g., psychiatric disorders and language barriers), fear of medical procedures, opium use within 6 h before admission (Because most of the opium have an average half life of 6 h), presence of blood in needle aspiration immediately before injection due to the prevention of vascular injection, and emergency situations requiring immediate interventions such as joint dislocation or unstable vital signs.

Blocked randomization was applied to assign the participants to the intervention (ice packing) and control (no ice packing) groups using a computer‐generated random number sequence with a block size of 2. All of the cards with the numbers printed on them were placed in a box. An assistant nurse drew a card before the procedure, and the participants were randomly allocated to either group accordingly. The study was nonblinded, so it did not require any concealment. An emergency medicine specialist who was in charge of this trial performed the procedure after taking informed written consent from the patients. The data collected by the questionnaires were analyzed by a methodologist who was responsible for randomization and was not involved in data collection.

Interventions
All the patients that participated in this study were candidates for digital nerve block. They were randomly divided into intervention and control groups. The pain degree was assessed by a verbal Numeric Rating Scale (NRS) ranging from 0 to 10, with 0 indicating “no pain” and 10 representing “the worst imaginable pain.”[8] On an average, a decrease of approximately 2 points or 30% reduction in the NRS represents a clinically important difference.[9] Before the procedure, the NRS for all patients was recorded. A piece of ice was applied to the whole surface of the finger base that had been covered by a piece of thin‐layered gauze in the intervention group. The preparation of pieces of ice was done by filling the latex gloves with water and putting them in the fridge. Every finger of glove was used as a piece of ice after freezing.

In other studies, cold water, cold gel packs, and ethyl chloride or other sprays have been used for cooling.[10] The temperature for impairing pain sensation should be below 4°C.[10] The selected time for ice application in this study was the same as previous studies. These studies showed that a longer ice application time caused discomfort and a shorter ice application time did not cause adequate analgesia, so the ice was removed after 6 min and the NRS of the participants was recorded again.[11] Under sterile conditions, a digital nerve block was done using the standard dorsal approach in both groups. The participants lied down on the bed while their hands could be held firmly to prevent withdrawal. A 3‐ml syringe (27G needle, 0.4 38 mm; USA) was inserted at the web space in the subdermal area to inject 0.5‐ml lidocaine 1% without epinephrine if there was no blood in early aspiration immediately after needle entrance. The NRS was recorded at the needle insertion time as the "needle stick" pain score and during anesthesia injection as the "infiltration" pain score. The other side of the finger was anesthetized in the same way. All procedures for all patients were done by the same emergency medicine specialist.

Outcomes
The primary outcome was to assess the effect of the ice pack on the reduction of both “needle stick” pain and “infiltration” pain during a digital nerve block. The pain score was initially measured by the NRS score at the needling time and then at the infiltration time. In the “ice” group, measurements were performed after 6 min of ice application. A decrease of approximately 2 points or 30% reduction in the NRS was considered significant. The patient satisfaction, as a secondary outcome, was assessed at the end of the study by a questionnaire that included three levels, namely low, moderate, and high satisfaction.

Statistical analysis
Categorical data were expressed as number and frequency, whereas continuous data were presented as mean ± SD and nonparametric variables were reported as median (interquartile range [IQR]). The Shapiro–Wilk test and Q‐Q plot were used to assess the normality assumption of the variables, so according to the establishment of assumptions, parametric or nonparametric test was done. Independent two‐sample t‐test or Mann–Whitney U‐test was used for continuous variables, and Chi‐square test or Fisher’s exact test was used for categorical variables. P < 0.05 was considered statistically significant. The statistical analyses were performed using the IBM SPSS software package version 22 (SPSS Inc., Chicago, IL, USA).

This study was registered in the Iranian Registry of Clinical Trials. 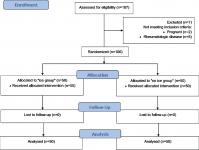 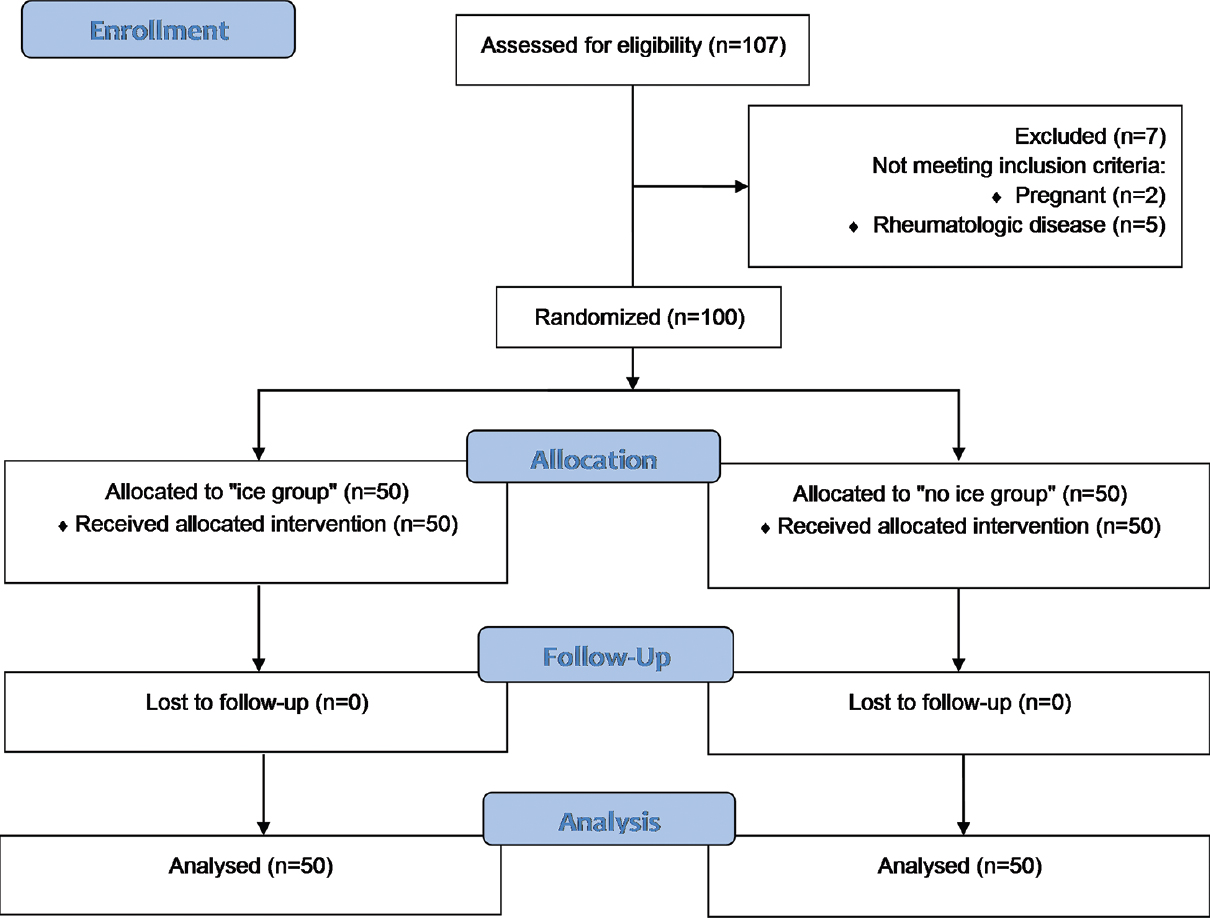 Figure 2. Comparison of the mean pain scores in the intervention (ice packing)
× 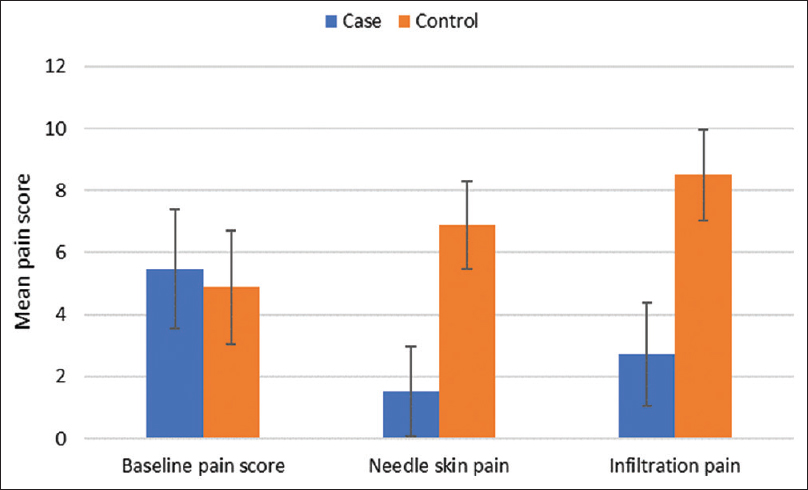 Table 2. Comparison of needle stick and infiltration pain scores with and without ice packing in traumatic finger injury

High satisfaction was observed in the ice packing group (38.8% vs. 0%), and the difference of satisfaction was statistically significant (P = 0.001) [Figure 3]. There was no complication in any participants of the groups.

Figure 3. Frequency of the patients in each satisfaction group according to
× 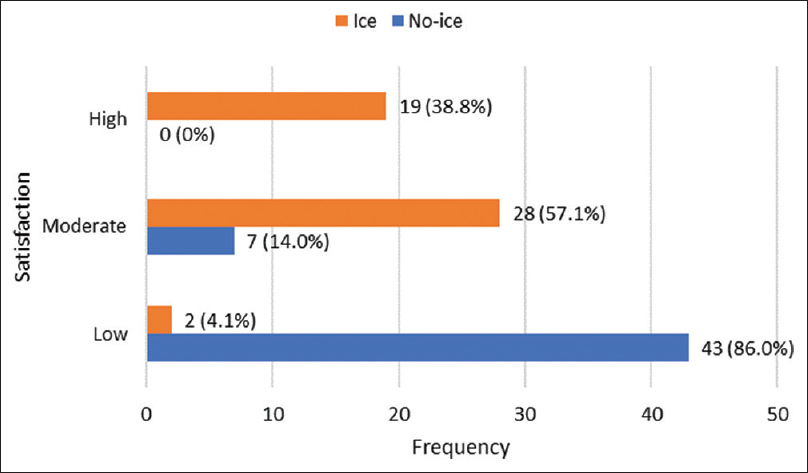 Needle stick and infiltration pain
In this study, ice packs were applied 6 min before a standard digital nerve block in the intervention group comprising fifty participants. The “needle stick” pain score decreased statistically significantly (P = 0.0001) in the ice group, which was similar to the results of a study performed by Hayward et al.[1] Hayward et al. also showed that ice application was not effective in the infiltration pain score,[1] whereas the infiltration pain score decreased significantly in our study similar to the results of[11] and Leff et al.[2]

The importance of time in ice application
Sarifakioglu and Sarifakioglu applied ice for 5 min before local anesthesia around the orbit and noticed a significant reduction in the needle stick pain score,[12] whereas Richman et al. revealed that the pain associated with intravenous catheter placement did not decrease significantly after 10 min of ice application.[7] Sarifakioglu and Sarifakioglu showed that 5 min precooling before injection significantly decreased pain during botulinum toxin injection.[12] However, in a study by Al Shahwan, ice application for 2 min before the injection of anesthetic solution had no effect on the infiltration pain.[11] Kuwahara and Skinner showed that 2 min ice application on the injection site was less effective than Eutectic Mixture of Local Anesthetics (EMLA).[13] On the other hand, Richman et al. showed that ice application for 10 min before intravenous catheter placement was ineffective in pain reduction.[7] We applied ice for 6 min, which was similar to previous studies because it has been shown that applying ice for less or more than 5 min might be ineffective in pain reduction or increase the pain level. The results of these studies indicate that the precooling time is important.

Needle size in pain perception
In this study, injection was performed with a 27G needle, which has had good effect on pain perception according to previous studies.[3,14,15]

The results of this study suggest that ice application for 6 min before a digital nerve block reduces both the needle stick and the infiltration pain. Ice application is an easy procedure that is inexpensive and available in every emergency room. Patients can be asked to place ice packs over their fingers during preparation. We assessed patient satisfaction with the procedure in both groups, which was statistically significantly higher in the ice group (P = 0.001).

Limitations
First, we could not measure the finger skin temperature before needling because it was timewasting in our crowded emergency ward, but it could help to learn more about the ideal temperature for pain control. Second, the ice pieces rolled around the finger base, so the temperature of the skin areas maybe different at the same time and influence on the pain perception. Third, we did not follow the patients for the duration of their wound healing in this study. Further studies are needed to evaluate the effect of ice on the duration of wound healing. Last, opium use within the 6 hours before admission was one of our exclusion criteria, but the effect of other analgesics that may have been used by the patients was not assessed.

In this study, applying ice on to the traumatic finger before a digital nerve block reduced the needle stick and infiltration pain significantly and increased the satisfaction of the patients. Ice packs are inexpensive, are readily available, and are easy to use; therefore, we recommend clinicians to use this method in the emergency room.

The protocol of the study was approved by the Tehran University of Medical Sciences’ Institutional Review Board (Date and Number). This study was registered in the Iranian Registry of Clinical Trials. (IRCT2017010731807N1).

RF, NA and PP designed the study. SM registered this trial in Iranian Registry of Clinical Trial. RF was responsible of collecting data and explanation of the study to the patients. PP, RF and SM designed method and analyzed data. All authors contributed in all aspects of the trial.